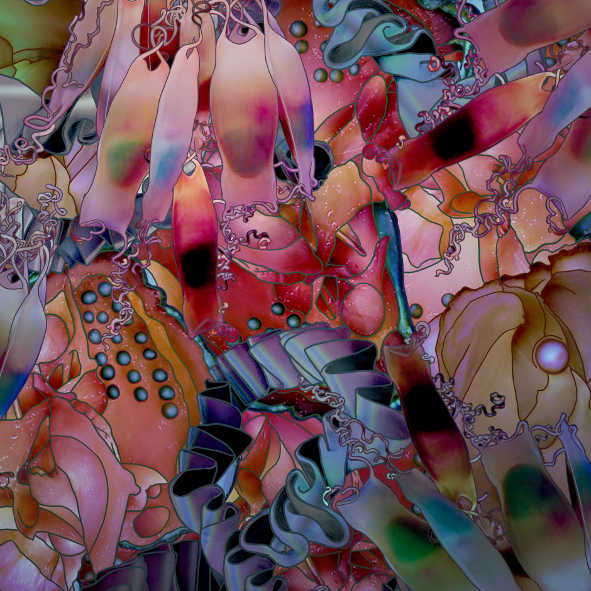 Mei Zhiyong is a contemporary Chinese noise artist, also active in field recordings, experimental film, and photography…he’s been doing it live since 2007, appeared on the compilation NOISERISING released in Hong Kong a few years ago, and has made a few releases on his own account – many of them split items, including team-ups with Torturing Nurse, one of our favourite noise acts from the Eastern zones. He’s also formed a profitable relationship with international mischief-maker Dave Phillips of Zurich, he of Schimpfluch renown, and when they played together in China in 2014 the enterprising Mei managed to get a DVD out of the situation, which is titled Sonic Rituals. “It’s about feelings, atmosphere, travel, friendship, sounds, passion and ceremony,” according to our Chinese friend.

Flushed with success, Mei toured Europe with Phillips in 2015, and the LP before us Live In Switzerland (AUSSENRAUM AR-LP-007) is one of the outcroppings of that particular exploit, capturing short explosive performances from Cave12 in Geneva and at the Lausanne Underground Film Festival. The record’s pressed in red vinyl, has a completely bonkers cover of digital flower petals going mad created by Flokim Lucas, and Mei Zhiyong himself has extremely long hair which evidently flies about when he’s doing his table-noise thing. All of the above are good harbingers, yet I found myself surprisingly disappointed by Live In Switzerland. The Cave12 side is inventive, making use of quite evil voice samples, and the stop-start dynamics used here are pretty extreme. But that same dynamic works against the performance, which comes over much like a bad-tempered car refusing to start despite frenetic turns of the ignition key. The energy feels blocked somehow.

The LUFF side flows better for sure, but still lacks a decent punch and I’m not feeling the body-blows which one might expect…I sense Mei Zhiyong may lean on his effects pedals a little too much, as about 40% of what he does is pretty much just feedback fed through reverb, resulting in the same harsh noise as many other noise-assaulters in this genre…it’s evident Mei Zhiyong is very serious about what he does, and has high hopes for noise music to offer a particular kind of mental liberation, a healthy short-circuit between mind and body, and an effective means of loosening one’s psychological shackles. Or, to use his own expression: “All the manic, quiet, extreme, abnormal have been preset by procedures and tools…only impaling nothingness will real make you get rid of the contradiction between voice and body, between body and mind.” I applaud these libertarian sentiments, and the visceral terms in which they are expressed, but Live In Switzerland falls short somewhere, just a shade too over-thought and reticent where it should be devouring all like a roaring tiger. I will revisit and play louder next time, hoping for a more explosive release. From 31st October 2016.