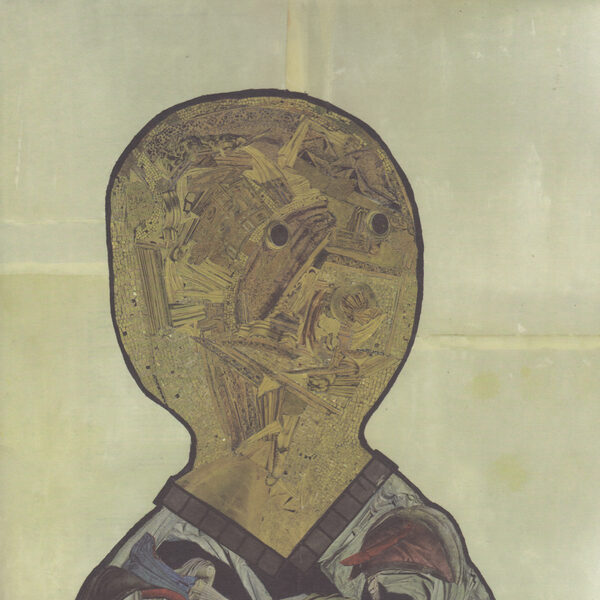 You may recall us raving about this Hen Ogledd LP in 2016, a great LP resulting from the team-up of avant-harpist Rhodri Davies and Richard Dawson, the English folk singer and scholar who created the remarkable record The Glass Trunk in 2013 (on which Rhodri played, come to think of it). Well, these two have now turned Hen Ogledd into a band or project of some sort, and here’s their LP Bronze (ALT-VINYL AV069), an astonishing six tracks of musical noise realised with the help of Dawn Bothwell, plus guest players Laura Cannell and Jeff Henderson.

That’s Richard’s artwork on the front cover, a collage called ‘Golden Person’, and with its near-anonymous implacable stare and inscrutable alien visage, this face immediately clues you in that you’re about to spin a very special record. From the opening track I thought we might be embarking on some pagan-mystery theme, rich in dark magick and old straight tracks and stone monuments…it’s called ‘Ancient Data’, an evocative title if ever there was…and on one level may summon up visions of early astronaut visitors and dreams inspired by Erich Von Daniken, or more simply may be a fancy way of referring to archaeology. However, musically it’s an uncategorisable sound, and only the voice work of Dawn Bothwell and the haunting recorders of Cannell might substantiate my theory, adding a mystical folk-flavour to the strange electronic and plucked jumble of inventiveness.

As to that, I suppose a cursory read of the credit notes may give some small indication of what Davies and Dawson were doing at Blank Studios under the watchful ear of Sam Grant (who recorded it), and once again Rhodri is amplifying and electrifying his harps to produce intense, astringent noise and bone-shattering drones, even surpassing his incredible work on Wound Response (amplification and distortion used for devastating results). But he also plays the loudhailer, nails, and marble. Richard Dawson’s credit list is even more arcane, including a number of things which might seem more at home inside a witch’s cupboard than in a recording studio; I could read these two lines of text over and over, until they resemble a form of poetry.

I say this in some attempt to account for the uncanny force and deliberation behind these eerie sounds, at times crude and brutal as the best post-punk band that ever existed, at times ringing together with a spiritual harmony and peacefulness that puts the listener at one with the universe, such as on ‘Beyond Belief’, a superb English update on the music of Popl Vuh. Perhaps Dawn Bothwell, with her synths, effects, and mostly her singing voice, is doing something to temper the alien-inspired antics of the two male players, and her sweetening influence is most evident on the short but gorgeous ‘Gwawr in Reverse’. But she also ends the album with her spunky lyrics to ‘Get My Name Right Or Get Out!’, a title which needs no explanation, and a song which comes over as feisty as a combination of Poly Styrene and Honey Bane.

There’s also the uncanny epic sprawl of ‘Gondoliers’ (the A side of this LP is so right-on it just destroys) and a real misfit on the B-side called ‘Amputated Video’. The broken electronic yawp of this gem has to be heard to be believed; so many English players aspire to capture the truth of the Radiophonic Workshop in their synth-led tributes, but this is the real goods, something which has crawled out of a demented dream-version of 1970s BBC daytime television like a manifestation of all your worst Dr Who fears. I think this record wipes the floor with a lot of contemporary pretenders who dabble in “ceremonial” or “pagan” music without any real understanding of what they mean, and the breadth of its sonic ambition is enormous. Truly astounding, and highest recommendation for this incredible piece of work. From 15th November 2016.