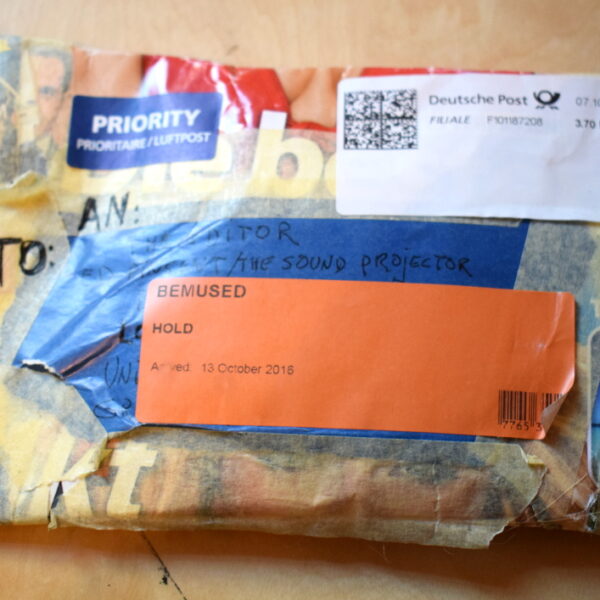 The latest enigma in the form of a cassette tape arrived from Rinus Van Alebeek on 13th October 2016. As usual the first task facing me – or anyone who purchases these hand-made works of art – is to unwrap the package and try and get to the tape. In this instance, you also have to remove strips of masking tape if you actually want to play the tape, since they’re placed so as to cover up openings that allow the machine to engage with the tape reels. Whenever I do this with one of Rinus’ releases (which are extremely limited), I always feel like I’m damaging the artwork in some way. I don’t see a way around this, however, since I do want to hear the sounds. How many owners of the first Velvet Underground LP actually have an unpeeled banana in their possession, and if they do, does it make the record any better?

Two sides…two suites which may or may not be related. With “Side White”, which is called “Done Before”, we’ve got a very episodic stream of consciousness, segments of long spoken-word affairs mixed up with the strange sound art which layers music, noise, field recordings and voices into tasty collage-pieces. There is an enclosed typewritten note inside the release, advising us “This tape has spoken word parts on it,” followed by allusions to details of the content, friends, fading memories, which leads into a slightly melancholic contemplation or reminisce of some kind. I sense that the artist is going through the attic and finding old letters, diaries, photos and other fragments of the past, and wondering what it all means. The only difference is that Rinus does his diary work using cassette tapes, rather than the notebook or the camera. “The other me that I heard on the recordings was at a long distance of the actual me”, is his puzzling conclusion. “The other me is almost a stranger”. I think we’ve all felt like this at some point in our lives…when I periodically clear out my desk at work, I look at notes I scribbled down months ago and don’t have the slightest idea what they refer to, or what I was thinking about.

“I could have faked the found tape idea,” the artist tells us. That triggered a reference in my own mental library…it’s possible that with “Done Before”, Rinus Van Alebeek has come close to realising his own take on Krapp’s Last Tape, that bleak vision of futility as penned by Samuel Beckett and featuring an old man playing back his old tape recordings, laughing at the folly and delusions of his younger self. But Beckett saw the universe as absurd and meaningless, and the whole play might be a metaphor for how we can end up alienated from our own past lives. “Done Before”, I would like to think, is far less pessimistic about the value and the meaning of memory; the creator is genuinely puzzled by it all, and would like to find out more. Perhaps the process of assembling this work is his way of addressing the issue.

Incidentally this side also includes contributions from the excellent Zan Hoffman who made Zanstones Fur Berlin on this label, and Tim Ruth, and portions of it may date back to 2001 and a visit to Louisville in Kentucky. Already the shifting time-travel aspects of this work present many interesting opaque layers for the ear and mind to traverse.

The “Side not so white” of the cassette is called “Historie d’un Pomme de Terre” (HPT). Voices on here too, I think…I’m not sure because things are somewhat more distorted here. At least on “Done Before” we can make out some snatches of spoken word (in English) which are intelligible, and indeed make us feel like we’re eavesdropping on a private conversation or a solitary reminisce, and create the effect which Van Alebeek anticipates when he speaks of “a…listener who will try to deduce a story”. On HPT however, the emphasis is more on the recording process itself, especially machines like Walkmans and their “inbuilt speakers”, and what ends up on the tape is a captured moment that’s as much a record of its own creation as it is a document of some slice of reality. The creator is evidently more interested in artefacts and faults, surface noise, tape hiss and distortion, relishing their unpredictable sonic textures, than he is interested in presenting an accurate record of the spoken word. We’ve heard this approach to the materiality of tape many times with Rinus, but what always impresses me is how nuanced and subtle the results are, the delicacy and care with which he preserves these fragile, fleeting moments of sonic beauty.

This material is great to listen to on its own terms, if you enjoy this strange decontextualised and rather abstract sound. But it also has the effect of making us try and decode the voices, and understand what is being said…we turn from being eavesdroppers and start to become more like spies, listening with our CIA headphones from the other side of the hotel wall, hoping for a clue that will break the case. It’s the aural equivalent of straining your neck to see what’s going on through an obscure window, and perhaps an even more extreme version of the “try to deduce a story” effect noted above.

HPT also features “unidentifiable French songs and Bollywood songs” apparently, reminding us that for all his apparent conceptual severity Rinus still enjoys good popular songs. Yet when these elements appear in HPT, they’re like fading memories of music, washed-out photographs, wispy and dreamy.