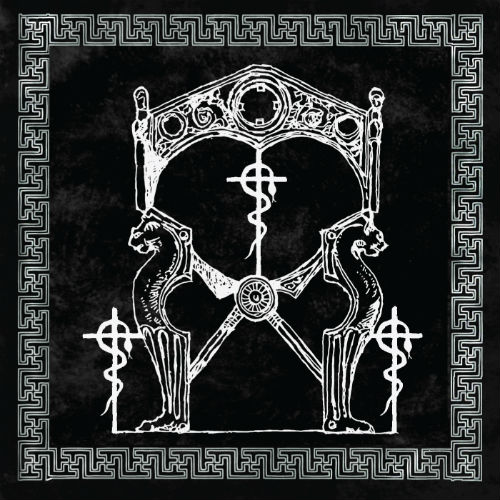 Now for some very grisly and soul-shattering “Horror-Electronics” from the American magus Burial Hex (Clay Ruby) last heard in these four walls in 2012 with the terrifying Book Of Delusions album. A quick glance at this madman’s Bandcamp page will indicate there’s no end to his prolific career in sight, and you’ve only to peruse the images of skulls, hooded figures, night skies, moons and planets, sigils, symbols, statues and magick hex charms to get an index on where his brain-waves are coming from. Ruby – or CLYRBY – still seems hell-bent on creating music that serves a purpose “In Psychic Defence” (to use one of his own album titles), and clearly perceives the world as an extremely threatening place filled with invisible enemies, demons and devils who strive to capture his soul. To keep them at bay, he dare not relax his charms for a single second, and consequently his every waking moment is likely to be dedicated to the production of this sickening, harrowing noise, filled with desolate atmospheres, harsh explosive effects, unpleasant grinding sensations, and ghastly shrieks of despair. The present record Throne (COLD SPRING RECORDS CSR232CD) is the third in a series of reissue albums, bringing together Clay Ruby’s contributions from split records made with Sylvester Anfang and Iron Fist Of The Sun, and other sources. If you missed the original vinyl editions, here’s your chance to catch up. It opens with three shockers of raw noise and yawping nightmare…for my reactions to ‘The Coming Of War’ and ‘Actaeon’, see this post.

‘The Feast Of Saints Peter And Paul’ is a work that in title at least must be understood as evidence of the “eerie religious allusions” noted in the press release; it’s not quite as violent or aggressive as some of the other punch-fests on this CD, and even allows the listener some room to breath in amongst teeming blocks of steel noise…but once you do inhale you will find the air is actually poisoned smog from the chimneystacks of Hades. Buried in this ingenious layered mix of shapeless black noise, we hear the pale echoes (the ghost of a ghost) of a celestial choir singing mangled hymns, as if Burial Hex were striving to portray the utter annihilation of all religious endeavour, yet still mourning its demise, and attempting vainly to reconstruct an entire church from the fragments of a charred and broken icon. A very bitter-sweet 19-minutes of angsty despair, chillingly beautiful in its abject visions…this was the A side of From The Rites Of Lazarus, released in 2010 on the Italian Urashima label.

‘Armagiddion’ was also rescued from Italian vinyl, the 2009 release Bagirwa Hymn on Von Archives. This is even more subdued and atmospheric and with its ambient tones, guitar sketches and exploratory drones, it’s almost like a zero-gravity stroll around what’s left of the scorched globe after a nuclear holocaust…Ruby once again finds a strange beauty in the horrors of the void, staring intently into dark corners where few men dare to peep. The esoteric artwork for the cover is by long-standing collaborator Nathaniel Ritter. From 30 November 2016.