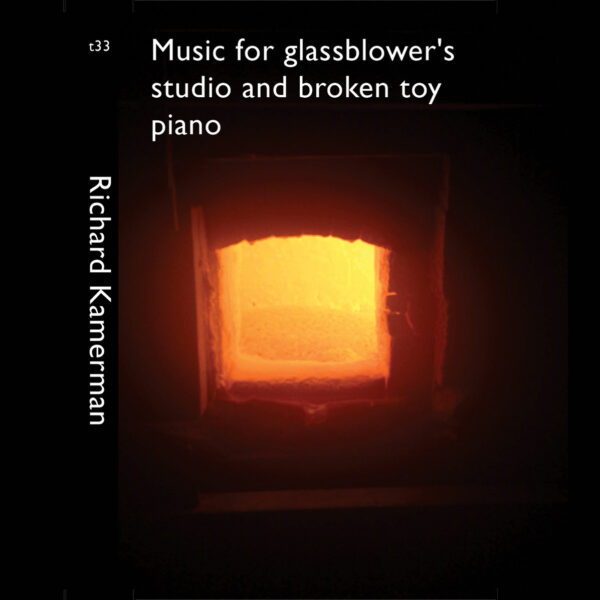 We have a lot of time for Richard Kamerman, the New York sound artist who operates the great label Copy For Your Records to release slabs and snippets of unusual noise of great power and mysterious charm. I see it’s been a while since we received anything from that label, but it may be because postage from the USA to the rest of the world is now so ridiculously high. His last solo album heard by us was None For The Money in 2012, though since then he has duetted with Anne Guthrie and as one third of Delicate Sen with Guthrie and Billy Gomberg. Very pleased to receive this cassette tape Music For Glassblower’s Studio and Broken Toy Piano (ORGANIZED MUSIC FROM THESSALONIKI t33), which arrives with a powerful “furnace” cover and two sides elegantly titled in ways that are typical of Kamerman’s minimal sentence construction and clever use of punctuation to subvert meaning. At first you may think this is just going to be a “normal” field recording type thing with its documents of the interesting sounds of a glassblower at work, but in fact it’s layered and dotted with all manner of unusual details – weird faraway echoes of unidentifiable sounds, distorted speaking voices, creaky drones, and even small portions of tentative melodies. Apparently it’s a blend of “site-specific recordings and performance”, suggesting that it’s valid to read the whole tape as a record of a piece of performance art. Natch, the purpose and meaning of all these invisible actions is completely opaque, yet it’s a highly compelling listen, a wonderfully textured and rewarding slab of mystery noise broadcast directly from the imagination. I would compare this one to the work of Jim Haynes, only less slow and wispy, with noisier elements and not quite so overtly mystical…100 copies made, released in July 2016, arrived here 5th December 2016.