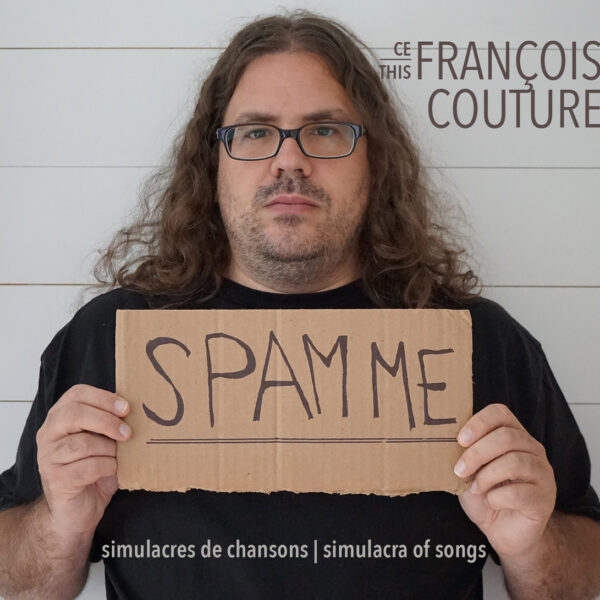 Highly unusual release is Spam Me (CUCHABATA RECORDS CUCH-095), sent to us by the Quebec composer CE François Couture, and first spin reveals a dazzling, dense and engaging array of lyrics, sounds, complex arrangements, weird noises, and hyper-intelligent art rock settings. He’s doing all this in the service of the concept, which is to call attention to the “spam” problem – those irritating emails we all get, and in some cases (mine at any rate) coded messages invading our very websites, through exploiting weaknesses in WordPress and other blogging platforms. One of these is the common CSS hack, which finds a way to use the cascading stylesheet as a mule to smuggle in its verbal contraband. Couture is clearly exasperated by this modern phenomenon, calling the spam messages “pests” and “flagrant failures at communicating”, but also observing that spam is so commonplace it has become almost invisible to us now. His plan is to set the spam texts to music on this album, almost in spite of his own frustration, or perhaps to exorcise himself of certain demons…he admits the texts, which are often scrambled and meaningless and badly written, “hold a poetic charge” for him. All of this feeds into what he calls “Simulacra of Songs”, the sub-title for Spam Me.

Apparently this is Couture’s 1 first solo record as a composer, a fact which I mention because it’s such an impressive and convincing set of songs, but he’s been active in music since 2010 working in free improvisation, and performing with groups La Forêt Rouge and RBC. There’s no musical style he won’t parody or plunder for this Spam Me project, a strategy which feels somewhat in keeping with the subject matter (getting revenge by poking fun at your enemy), and you can hear him try out everything from hip-hop (‘Magie Rouge’) to art-prog (the title track); some of his post-modern ballads, with their imaginative intervals and dissonances, reminded me of Slapp Happy and Peter Blegvad, with all the awkwardness and mannered style that implies. He’s also prone to high drama, such as on ‘Parajumper Kodiak’, where he delivers the nonsensical spam text in an actorly, declamatory style over a klunky musical backdrop worthy of Magazine or A Sudden Sway. What I appreciate about the vocal delivery is there’s nothing tongue-in-cheek, no matter how ludicrous and absurd the text may be (and they get pretty cracked, lemme tell ya); he takes it all seriously, and lets the spam subvert itself.

An enclosed leaflet tells us a little more about the process of creation and composition – all the spam texts were left on his own music blog – and reproduces the texts in full, so you can double your twisted pleasure by reading as you listen. Just watch your face in a mirror as you do so…your eyebrows will soon reach the top of your head. Parts of this record reminded me of recent work by Alessandro Bosetti, particularly the Stille Post record set; but where Bosetti has some residual faith in our ability to communicate effectively using technology, CE François Couture evidently thinks the human race has completely lost the plot, and all we can do is propagate incoherent gibberish on a global scale. Hard to argue with that…one of the more unusual items we have received lately, and a real winner. From 1st December 2016.