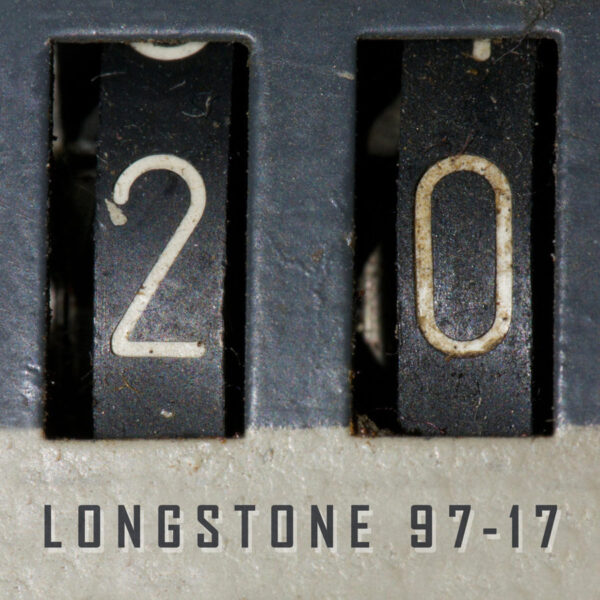 To commemorate two decades of under-the-radar activity, Cheltenham’s electro-champions Longstone are offering a downloadable anthology, 20. Clocking up a corresponding 20 tracks, the collection offers a sufficiently succinct stocktake of their work since 1996 – covering 10 CDs, 5 EPs and numerous compilation appearances – combining all into a plastic continuum steeped in permutations of their signature synth-piston pulsations stacked with voice samples (e.g. ‘A Living Space’), but finally streaking into the sunset with a red-raw rendition of their would-be masterpiece Risaikuru. Much of the interim has the aspect of a getaway vehicle for musical subgenres that have flickered in and out of favour since the ‘90s. Our boys osmotically adopt mannerisms at will, popping out process-based pop with an almost plunderphonic glee, or otherwise outsourcing strident remix duties to select colleagues.

20 broadly covers four theatres of operation: bleepy, post-idm electro-pop; dub and trip-hop-tinted downtempo eye-glaze; a wide spectrum of space rock abstraction from MBV to Add n to (x) (think Little Black Rocks); and into their more recent taste for ethno-fusion musique concrète. While little is designed to catch the eye, the duo’s facility for detailed electronic textures – be they distortion-based drone or gentle storms of synthy swirls – as well as the palpable deepening of sound-field and arrangement over the minutes – ensure listeners much slow-burn satisfaction. Along the way, one might discern family resemblances to the likes of To Rococo Rot (‘Mobilfunk’), Stereolab (‘Charles Atlas Remixed’) and even (tangentially) David Bowie in ‘Subdivision’, where the catchy walking bass and goa beat – doused in crackling electronics albeit – take ‘Sex & The Church’ rather roughly from behind.

Of immediate benefit are neighbourly encounters with outsiders like Sonic Boom, whose remix of the multilayered sound matrix of ‘Convex Structure pt.3’ (from a split 10” with Stylus) places the pop tendencies in a pressured, subterranean psychosphere, boring so deep that it all passed through to the other hemisphere and into beautiful, balmy release. Such harshening seems reserved for remixes: ‘Dulce’ is a gently mesmerising feat of repetitive construction that seems to have fallen off the back of a Kid606 EP, with gritty electro-dub throb and tinny beat-box timpani slowly hemmed in by a wall woven of warm wool.

It’s tempting to attribute similar causality to ‘Kabuki pt.3’, with its red herring blast of kosmische noise betokening high-octane spaghettification slowly supplanted by a plate of maudlin spaghetti western guitar and violin; part of the pan-globalist morphology defining Longstone’s recent work (Kabuki, Sakura and Risaikuru among) – some just layers removed from FSOL’s mid-’90s synthetic realism. The latter ‘trilogy’ especially arises from the concomitance of Ward’s interest in themes Japanese (his blog details many enviable excursions there) and the recent influx of a semi-regular cast of organic musicians: percussionist Stuart Wilding, clarinetist Chris Cundy and strings man Kev Fox, whose improvisatory backgrounds have opened Longstone up to a more indeterminate and organic worldview, and thus a bold new frontier for the coming decades.