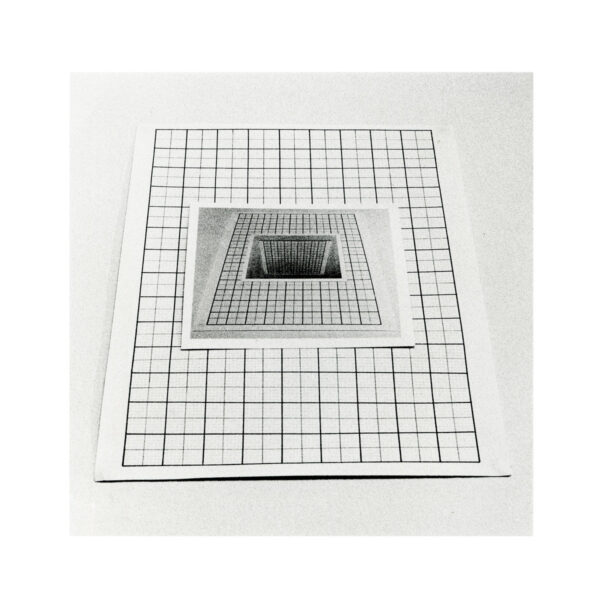 London-based sound artist Louie Rice has been ruining my life for some time now with releases from his labels Wasted Capital Since 2013 and Hideous Replica, home to ultra-minimal reductive electronic music that refuses to explain itself. That mode continues with 33/45, a seven-incher released by Organized Music From Thessaloniki, which makes plain its intent to alienate the listener with its severe sleeve – strange futuristic grid imagery on the cover, and stark black typography on the back. Indeed the press release is proud of the cryptical and opaque stance presented thusly, describing “two tracks marked only by their playing speed and no additional info at hand”. As with all minimal art, I suppose, the intent is limit the options faced by the audience, to encourage (some would say force) our total concentration on the message at hand. This particular outing contains many fragments of broken noise, which resemble snapped pieces of scrap metal being popped open in your face, recordings of which have been scrambled and rendered into nonsense by very drastic editing. On the first side, these noises are suspended in a near-vacuum, with only an insistent cyber-pulse to remind us that we’re still alive and not trapped in some conceptual science-fiction Hell. The B-side, which plays at 45, frames the noises in a setting which I expect we could read as Louie Rice’s idea of “disco” music. It’s often tempting to think that the contemporary generation of experimenters are influenced by Techno music as much as by the 20th-century schools of musique concrète and electro-acoustic, and indeed this is a theme that has been carried on in much of the discourse surrounding Mego, glitch, the Cologne school, Raster-Noton, and many others since the late 1990s. To his credit, Rice (and his compadres Alves and Asnan) seems to be developing his own uniquely “evil” and alien take on the genre, seething with implied threat and hostile gestures. From 5th December 2016.