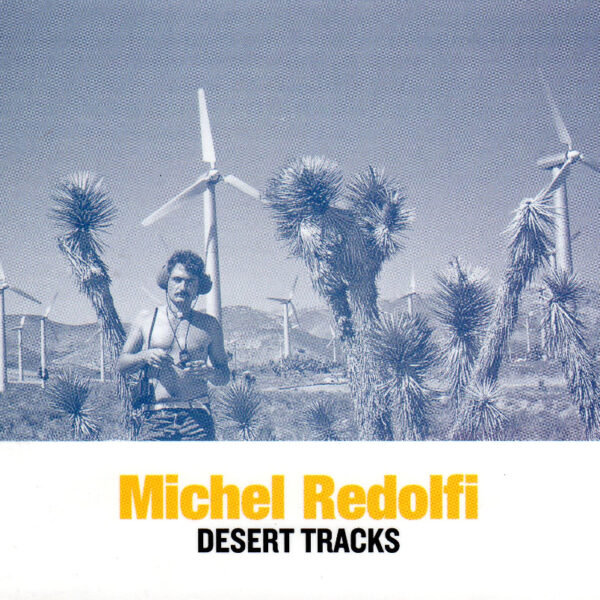 Very strong set of musique concrète compositions from Michel Redolfi on the album Desert Tracks (SUB ROSA SR418); the Belgian label Sub Rosa have taken it on themselves to reissue this album which first appeared on CD in 1988, as the first half of a set that also included Pacific Tubular Waves. Redolfi is associated with the Marseille wing of the French school, and was co-founder of the Group de Musique Experimentale de Marseille since 1968; he also served as director of the Centre International De Recherche Musicale (CIRM) in Switzerland. Although he’s collaborated with Ferrari, Parmegiani and Henry, he’s also not averse to working in America, and in fact lived there for nearly a decade, forming alliances with American composers and working in Californian University music centres. It was in the Californian deserts in 1987 that he captured the basic sounds that have gone to make up Desert Tracks.

While we’re more than familiar with field recording types and phonographers who settle for capturing rather uninteresting aural snapshots of the landscapes they visit, Michel Redolfi was aiming high right from the start. He used digital recorders (one of the first ones ever manufactured), binaural mics, and mics poised on stands, in pursuit of a “3D depth of field” and “divine silences”. He speaks of “hypothetical poly-sensorial desert tones”, clearly enthused by something more profound than a mere sense of atmosphere, and responded eagerly to what he regards as the high drama of these desert environments. To capture these impressions on tape was enough of a challenge; then came the editing and processing stages, back in the studios of Cal Arts and CIRM, where he added synthetic drones and electronic music. But this addition was done with tremendous care and sensitivity; he wanted to keep the electronic elements “sparse and bright, to express the crude light”. I like that reference to the sunlight; old Sol must have presented an unforgettable presence in that airless Californian desert hell. Clearly, Redolfi had more than his retinas burned by that fiery orb, and was intent on creating an authentic landscape painting in sound, building on his documentary recordings and displaying a deep awareness of the environment, the weather, the light – to arrive at his own series of profound and imaginative meditations on the subject of the desert.

Desert Tracks follows a kind of trajectory, where there’s something approaching a musical theme at the start – the rather ominous ‘Opening’ – followed by the sparse grimness of ‘Mojave Desert’ and the near-insufferable surface of ‘Death Valley’, which contains some pretty harsh textures of broken noise. This particular segment may owe something to “the impeccable strip of asphalt” that you can walk down to cross the valley. So far the desert is emerging as a hostile, uncaring zone of bleakness and pain. After this we enter the relative calm of ‘Palm Canyon’, which was purposely composed to evoke an oasis and the wildlife (wasps and birds) that inhabit that area near the Mexican border. U2 fans would probably know it from the cover to the best-selling 1987 album. The album ends with ‘Too Much Sky’, 10 minutes of beautifully serene sound that rewards the patient traveller who has made it across this wilderness in one piece, and again indicates Redolfi’s perceptive take on the landscape, the quality of light that must seem overwhelming to Europeans. By this point even the listener is in need of a pair of good sunglasses. Incidentally ‘Too Much Sky’ predates the main suite by three years, and is only available on the CD version of this release, thus making a nonsense of my “trajectory” theory.

Redolfi’s no stranger to elemental subjects like this; his first published works for INA GRM Immersion / Pacific Tubular Waves have a “watery” theme, which recurs with Sonic Waters (1984), Crysallis, the underwater opera (1992), and his many Underwater Music releases. This aquatic jag has been obsessing him since 1977, so this shift to giving the desert sands their due clearly marks another chapter in his thematic pursuits. From 12th December 2016.