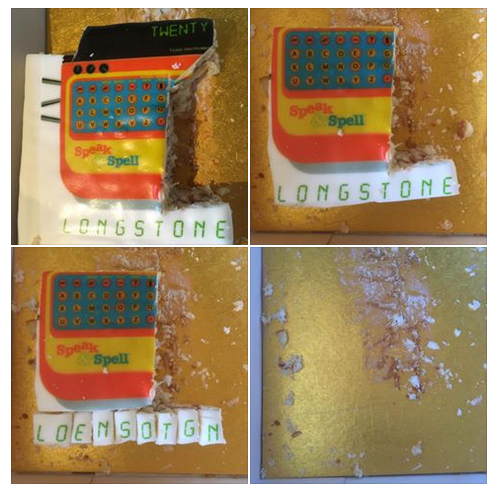 Longstone have lately been celebrating their longevity, with a 20-track, 20th anniversary anthology and an evening of performances in their hometown of Cheltenham in August 2017, featuring friends from along the way. The following interview followed on from said event, features the group’s core duo of Mike Ward (MW) and Mike Cross (MC), and took place via email.

TSP: What have been some of the milestones/defining points in your 20 years of work?

MW: We had some pretty early breaks in our Longstone career which really got us off to a good start – the first of which was Sonic Boom playing our initial release (Convex Structure – a split 10” with Stylus released on Ochre records in 1997) as part of his featured mix on Mary Anne Hobbs’ Radio1 show.

MC: The first album (Surrounded by Glass 1998 on Ochre records) got a few tracks played on John Peel’s Radio1 show too and we also got a couple of plays on Radio3’s Mixing It which helped get Longstone out to a couple of different audiences.

MW: Our first major gig was also at the CMJ festival in NYC in 1997 which was a good way to get us off the starting blocks!

MC: And over the years we’ve worked and collaborated with some very interesting people – Will Sergeant, Sonic Boom, Paul Simpson and Werner Herzog collaborator Ernst Reijseger as well as being part of the Ochre Records Serpents project. We also had the opportunity to perform a live re-score for a short film by Osbert Parker as part of a Future Shorts evening at the Ritzy Cinema in Brixton which was a real pleasure.

TSP: Given how carefully (and chronologically) arranged the (20) comp is, and especially in light your changes in recent years, how do you feel about your earlier work now?

MW: We’re very happy with it. We’ve been fortunate enough to have had the freedom to do whatever we’ve liked over the years and it’s been great having no one else dictating our direction.

MC: listening again carefully to the back catalogue to prepare the anniversary release wasn’t a hardship at all!. Things have changed and evolved over the years but experiencing the early, more electronic tracks again is strangely refreshing!

TSP: To what extent are your working processes determined by improvisation? How much do you depend on it as an activity?

MC: it’s become increasingly important over the years, especially with the later involvement of Chris, Kev and Stuart.

MW: It’s still a mix of processes really. Some tracks are carefully arranged and some are almost entirely improvised.

MC: In the early days it was pretty much all about the technology. The first 4 albums were almost entirely and unashamedly electronic. We mixed modular synths with circuit bent electronics and complimented everything with the liberal use of software synths and processing tools. The balance has of course tilted a little more to the acoustic side of things in later years.

MW: Digital technology has made what we do easier. We can access high quality recording software on a laptop and the pallette of sounds is now almost infinite.

TSP: Regarding the recent recruits (Cundy, Fox, Wilding), are they ongoing roles? Any desire to incorporate further musicians?

MW: Chris has been in the band a long time now. We played a gig or two with him after we had met and really liked the mix of real instruments with the electronica , he’s a great improviser and composer so those skills contribute. Later similarly we played a one off show with Stuart joining in and he’s been joining in ever since for similar reasons – it increases the pallet of organic sounds and adds to the live spectacle. Kev has his own act 90 Degrees South and we’ve worked with him as a guest on and off over the years. More recently we’ve had more bass and guitar parts in the set so Kev’s role has evolved from that. Previously we also worked with Steve Moody who also does most of our album art and design, but he lives in New Zealand now so still does art work but obviously can’t make gigs.

MC: Chris, Kev and Stuart have been involved now since about 2010 in one capacity or another so they’ve become a very important part of the modern Longstone sound – there’s certainly no plan to change personnel.

TSP: Japan seems to be a running concern of late. Can you explain how it has come to influence your creativity? Which cultural aspects have been particularly influential?

MC: Over to Mike W for this one.

MW: I’m the person with the largest interest in Japan. It started with films, the first being Tampopo , then pretty much everything by Kurosawa , Ozu , Mizoguchi and more recently Kore-eda. This sparked my interest in multiple aspects of Japanese culture, history, art, architecture etc. Later after my first visit there in 2009 when I visited Nagasaki, I became very interested in Japanese photography and particularly the use of books to present bodies of work. Naturally I wanted to incorporate the imagery and themes from my interest in our work. Then the tsunami happened and I guess for anyone with interests or friends in Japan it was a shock. We made a record to raise some small funds for a charity in Onagawa. Then on my next vacation I visited the town – I really didn’t know what to expect but I will never forget standing in the empty space where a town had been just two years earlier. It was this experience combined with the interest in photography that inspired the Risaikuru project.

TSP: Any other commemorations lined up, apart from the comp and the recent anniversary show?

MC: There’s nothing else specifically planned to mark the anniversary but we are working on a new album that’s likely to draw ideas and inspiration from past themes as well as new ideas. This one won’t have a specific Japanese slant but will still have a nod to Mike’s travels in one or two tracks.

MW: Mike and I have actually been working in bands together for over 30 years now so there may even be some pre-Longstone influences in there.