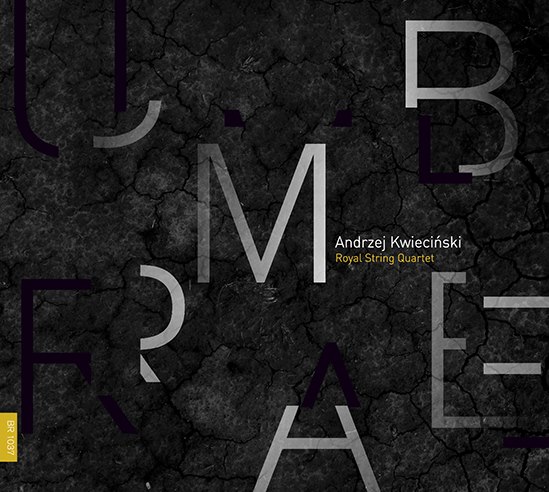 Umbrae (BÔŁT RECORDS 1037 / DUX 1371) is a collection of four modern pieces composed by Andrzej Kwieciński, and played by Royal String Quartet. It’s a pretty intense set, with plenty of dissonant tones and anguished emotions on display, but still achieving a species of doomed beauty, and all composed and performed with a certain steely authority and gravitas. Kwieciński’s quite a young fellow, and happens to have been born just at the tail end of Poland’s early 1980s crisis, when trade union leader Lech Wałęsa went up against the communist authorities, who put the country under martial rule in 1981. However, Kwieciński is one of a number of Polish composers from this period who have remained “untrammelled by the Polish past”, and presumably welcomes the general shift from communism to capitalism that has been underway in Poland ever since.

Despite any attempts to forget Poland’s grim history, Kwieciński’s music on Umbrae is sombre and grim in its overall caste. The title track sets out the composer’s stall in no uncertain terms – a parcel of dissonant chords which express an unfailing mood of bitterness. Get used to those jarring arrays of ill-fitting notes; there’s plenty more on the album to come. The mid section of ‘Umbrae’ is especially alarming and agitated, and already I wonder if I’ll come out alive. ‘Contregambiles’ is even more unsettling, and feels very 20th-century in its use of random-seeming swipes of the strings to produce hideous chords, as if composed by “aleatory” methods. A man can’t get a foothold on the shifting sands here, and there’s no tonal centre to call a home.

At least on ‘Mural’ Kwieciński deigns to use some repetition – at any rate I think I can make out a repeated phrase and variations on it, which restores some small sense of comfort to an alienated listener. The overall mood is still gloomy as heck, and if I was beholding a mural on a wall of a Polish civic building, chances are that it would mostly be painted in shades of black and grey, and depict scenes of oppression and misery using many oblique symbols to allude to a long history of human pain.

My favourite piece here is ‘Luci Nella Notte V’. It’s far calmer than the rest of the set and provides a balm to all the agitation and unrest that sits either side. He’s manage to wrest a fascinating sound from the string players – astringent despairing tones, strings that cut and burn with their dolour. At some point here I was reminded of the works of Purcell, which might not be an inept comparison; Kwieciński studied Baroque singing (he is in fact a countertenor vocalist, like Alfred Deller), and the sleeve notes allude to another Baroque influenced orchestral project of his called Canzon de’baci, based on a 16th century poem by Guarini. Any fellow who digs the Baroque classics can’t be all bad, even if he does emphasise the pain and heartache within Purcell’s music. Packaged in a six-panel digipak (for no good reason, apart from allowing some typographical indulgences) with a booklet insert, notes in Polish and English, and a photo of Royal String Quartet dressed in black and ready for action. They look like a team of paid assassins from a Jason Statham movie. From 21st December 2016.