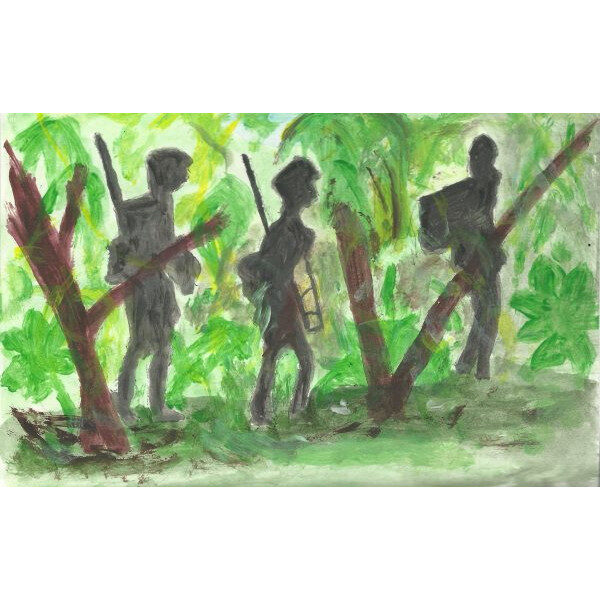 The cassette by Usurper is on Singing Knives Records, the Sheffield label who are doing their part to keep the lunatic fringe alive…the Scots duo Usurper occupy the first half of this 45-minute tape with an interminable piece of absurdist poetry / performance art, on which they recite words such as “snake, monkey, mosquito, giraffe, elephant” with bizarre vocal inflections, and create their own brand of broken, formless acoustic noise using whatever non-musical objects they can clasp in their paws. We are invited to read this escapade as a warped 19th century jungle expedition, along the lines of a lost Joseph Conrad novel…to me it feels more like they’re glancing at pictures in a children’s story-book, which is not meant to be a disrespectful remark, but there is a sense of infantile fun at work here, a possibility which is not dispelled when you see pictures of them performing with hand-drawn paper masks attached to their heads with masking tape. This “jungle” side appears to have begun life as an experiment using the Google search engine, subverting its “normal” use and instead using it as a random word generator of some sort. As they near the end, and the cries of “snakes! snakes!” become increasingly more demented and alarming, we might almost be hearing an episode of The Goon Show…it conjures up comic-strip images of hapless explorers in pith helmets and khaki shorts, flapping about as they face their doom.

Usurper are Malcy Duff and Ali Robertson from Edinburgh, and have released a fair number of CDRs and cassettes since 2005 for labels such as Giant Tank, Sick Head, Harbinger Sound, Unverified Records, Bug Incision Records, and Chocolate Monk. I’m unsurprised to find that Malcy Duff has worked once or twice with fellow loons Anla Courtis and Dylan Nyoukis; Usurper’s inchoate noise is not far apart from the churning porridge mass that Nyoukis specialises in. While I enjoy the absurdity of Usurper, their noise disappoints me as sound art; it seems thin and under-nourished. They seem to have no interest in using the microphone as anything other than an inert instrument to document their flat and uninteresting voices, which would be fine if there were a bit more energy and variation to the vocal performances. Consequently much of the tape is a dreary listen.

Usurper continue on the B-side which, judging by other online accounts of the tape, involves a dialogue around a kitchen table with more non-musical objects and simplistic repetitions of “rat-a-tat” and “blam”, while a young child occasionally intervenes with their own vocal contributions. Again, the rather flat delivery of the monosyllabic nonsense words is disappointing; in the hands of a Dadaist like Tristan Tzara or Hugo Ball, this vocal salvo would have created an explosive situation and every “blam” would have struck terror into the hearts of the bourgeoisie. By contrast, Usurper just seem bored and unengaged; this may be a deliberate post-everything beyond-ironic stance, but it also makes for a tiresome listen. However things liven up somewhat when events take them outside, and against the roar of traffic Duff and Robertson suddenly erupt into an impromptu improvised dialogue that blends clichéd dialogue from cowboy movies and pulp novels with surreal, florid, stream-of-consciousness gibberish. Overlapping voices give the listener too much to digest, and the sheer lunacy of their performance is enough to short-circuit common sense in 50 seconds. From 30th December 2016.