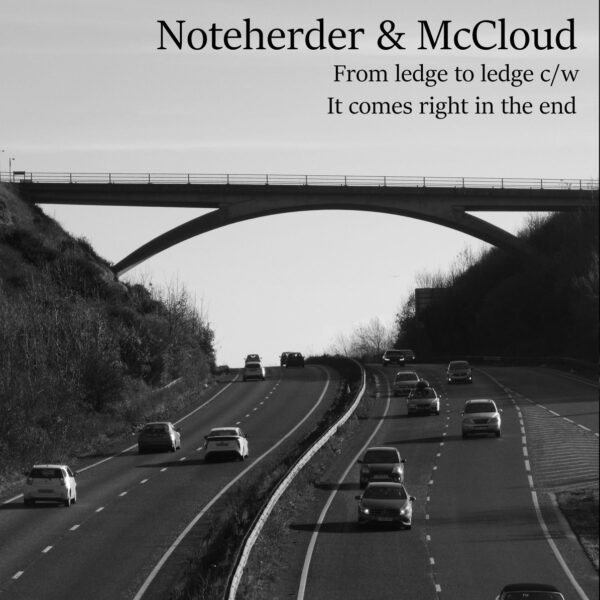 Noteherder & McCloud have released a nifty limited edition lathe-cut piece of product…a 7-incher with two tunes of “pop song” length, which I totally recommend if you can still get one of the 32 copies in existence. ‘From Ledge to Ledge’ sees Chris Parfitt freaking out on his soprano sax like Evan Parker having an epileptic fit in a zinc tunnel while Geoff Reader parps out spastic techno-bursts from his ultra-primitive synth deck. This was from a 2015 live set at The Green Door in Brighton organised by Spirit Of Gravity, who released this as GRAV116…on the flip there’s 3 mins and 50 secs of ‘Jammed In The Shingle Middle, It Comes Right In The End’, on which the electronic half of the act is doing a superb low-key impersonation of the Network South train that presumably took them to Bar 42 in Worthing, where this was recorded. Meanwhile Parfitt has evidently discovered the one “perfect” note on his sax, and keeps repeating it for at least sixty seconds. Either side of this are some highly tasty Lol Coxhill-styled licks with the honeyed curlicues and effortless breath control that were among Lol’s hallmarks. I think this duo are one of the UK’s best kept secrets, but half of the Brighton cognoscenti seem to be hip…for further Brighton doings, you could do worse than scope out the Spirit Of Gravity links, for programmes of events and embedded Soundcloud links so you can catch up on the radical noise you’ve been missing for the last 56 months. From 23rd December 2016.