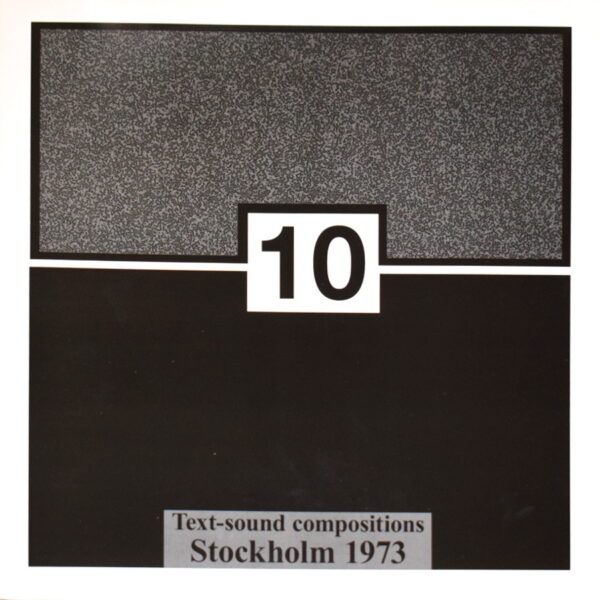 Volume Ten of Text-Sound Compositions (FYLKINGEN RECORDS FYLP 1041) is dated 1973. The A side is strongly recommended to those who are intrigued by “cybernetic music” and both the pieces on this side offer us a period view of what artists imagined that computers meant to us in the early 1970s…they are speculative fiction in sound form, musing on contemporary society and what the place of mankind might be in a world dominated by technology.

First, there’s ‘Announcement’ by the Hungarian composer Tamas Ungvary, who more or less settled in Sweden in 1969, gradually being seduced away from his career in conventional classical music (he was a conductor and contrabass player) towards the possibilities afforded by electronic music. His work here is early computer music, synthesising speech recordings through a program at EMS. He was directly inspired by a news cutting, a printed announcement seeking “ideas” (a reproduction of it appears at the end of this post). He was incensed that the culture had brought us to this low point, that we needed to “advertise” in order to fulfil a basic human capacity for thought. This made him speculate strangely about how, when computers had taken over the world, the machines would start to look to human beings as a source of new ideas. This theme of computer-intelligence is familiar to all readers of science fiction, but Ungvary has a twist on the tale, and is trying to say something larger about the entire culture and its insatiable need for ideas to keep progressing. A bleak prospect. The technology he used may be early and seem clunky now, but computer-generated speech has rarely sounded so disconcerting.

Dutch artist Herman Damen surfaces again (he was also on Volume 8), with ‘Psychocybernetic Performance’, another piece which is also “cybernetic” in flavour. The piece is an odd mix of aimless electronic poops and whines interrupted by distorted speaking voices, and if you feel like you’re only hearing one part of a conversation it’s probably because this is the soundtrack component of an elaborate performance piece. The notes for its performance are reproduced here, and one of the requirements is “some nudes are texted and impregnated with a cosmetic liquid”, a grotesquerie illustrated here by the black woman with the word “FEEDBACK” written on her torso. Overall this feels very dated in its theme, a sarcastic and rather laboured attack on fairly obvious targets, but the treatment is still strong and it has a nice radio play vibe.

Lars-Gunnar Bodin is without doubt one of the big Kahunas in Swedish 20th century art music. I see from the notes here that he’s credited, along with Bengt Emil Johnson, with inventing the term “Text-Sound Composition” in the first place, which isn’t to say they were trying to create a restrictive elite, but rather define a very precise description for a practice they considered to be unique. Among Bodin’s accomplishments in his homeland, he was chairman of Fylkingen and studio director of EMS; internationally, a student of Stockhausen, Ligeti, and disciple and fellow-traveller with Cage and David Tudor. No surprise that his ‘Semicolon; Seance IV’ is showcased by being given the entirety of side B, allowing its 18 minute length to unfurl like a grand flag. This full version makes up for its previously truncated release on CD in 1994.

‘Semicolon; Seance IV’ is an electro-acoustic composition really, although voices and spoken word play a major part. Percussion and piano are to the fore, plus some clattering racket I can only allude to as “unseen banging about in a room”, but rendered in a very deliberate and composed way. The voice parts are delivered by the Svisch group, an ad-hoc ensemble featuring many notable Swedes, yapping out their avant-blather in stern manner. For instance the great Åke Hodell, whose 3-CD Verbal Brainwash is an unforgettable diatribe of harshly political text-sound attacks, is part of this team.

I wish I could get under the carapace of this difficult piece, and I suspect that even if I understood the Swedish language I would still be baffled by the utterances and sayings of the Svisch group. The text portions were apparently inspired by parapsychology, an abstruse enough field in the first place which leaves me stranded from the get-go, and the fundamental themes have probably been further mutated by passing through the complex brain filters of the great Bodin and his large cranium. An awareness of Öyvind Fahlström’s “happenings” of the early 1960s also fed into the piece, which may account for the tremendous sense of “moment” going on here. A mysterious, yet compelling series of episodes for us to process.

We’re also witnessing the rise of the EMS Studio in Stockholm as an important cultural force. ‘Semicolon’ was executed in the early 1960s at a time before EMS was as sophisticated as it now is; Bodin is at some pains to express what an achievement it was to realise the piece at all, and is effusive in his praise of Christer Grewin’s technical assistance. No wonder.