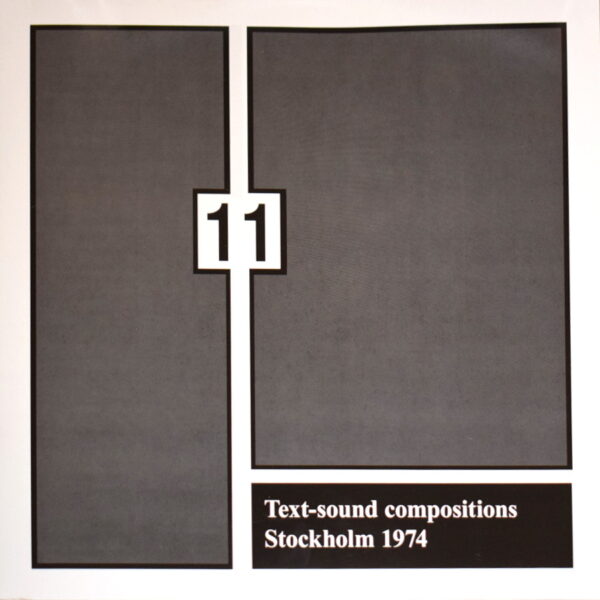 Volume Eleven of Text-Sound Compositions (FYLKINGEN RECORDS FYLP 1042) is dated 1974. If you want much variety and short pieces for your dollar, plus a fairly wide range of international artists, this might be the one to pick from the whole set, although I did find it very variable in quality.

Christer Grewin’s ‘Words That…’ is a strong opener. The text materials for this come from an unknown Latin American writer, suspended in a minimal soup of electronic sounds and whispering. Meaning and context are subverted or twisted by Christer’s subtle interventions.

Lars Hallnäs’s piece is called ‘Mit einer Rede Von…’, a quite good text and computer-sound piece with a rather stilted halting delivery that is somehow endearing. I had to wince when I read it came out of a period of “defiance and rebellion” for Lars. The recording is a very Swedish middle-class notion of what defiance and rebellion sounds like, a very genteel affair based on the ideas of intellectual film-makers and philosophers of the 1970s. He cites Jean-Luc Godard, but lacks the Frenchman’s bite. Still, punk rock hadn’t quite been invented in 1974.

Roberta Settels ‘P4’ is a hot item. A very effective blast from this American ex-pat who was in Sweden at the time. There is some text, but it’s mostly a radio waves experiment, and solar flare activity comes into it somewhere. For these reasons, perhaps we can draw a line from here to Disinformation’s Stargate and Per Svennson’s Intergalactic Transmission. What I like here is the sense of imminent danger, as though we’re hearing things we shouldn’t, broadcast from a part of the universe we ought to leave alone. I’d love to hear more from Ms. Settels, but she only made one LP in 1985, which was suppressed by an established label due to its controversial subject matter (expressing apparent sympathy for a terrorist), and she ended up self-releasing it on her own Music In Crisis label. Jon Appleton is another American, well loved in this house due to his Appleton Syntonic Menagerie 2 CD compilation. He also made a record with Don Cherry on Flying Dutchman. ‘Rödluvan’ is his take on Little Red Riding Hood, which doesn’t work quite as well as it ought. The strongest element is the young Axel Bodin doing the reading. Appleton’s Buchla synths aren’t as exciting as they could be. Something of a throwback to an old popular classical record format (e.g. Peter and The Wolf) but slightly undermined in some way. I’d like to pass over Eugeniusz Rudnik’s ‘Wokale’. You may have noticed that Bolt Records in Poland is doing everything they can to restore Rudnik (and the Experimental Studio at Polish Radio) to his rightful place in the history of electroacoustic music. In case you haven’t got enough material from their extensive reissue programme, here is a five minute unreleased item. And it’s a massive embarrassment to hear Rudnik vocalising a “boogie” rhythm over a clunky electronic track. Maybe it could end up being passed off by some hoaxer as a Paul McCartney out-take from his 1980 LP.

Rune Lindblad, another king of Swedish electro-acoustic music, ends this LP with an uncharacteristically “direct” piece. 1 ‘I Want To Go Home’ attempts to address the problems of old people in society and ends up levelling an accusation at the Institution of old peoples’ homes, and the uncaring authorities who run them on behalf of the state. This is achieved with a documentary interview that reveals the total lack of compassion and comprehension displayed by a professional “carer” as he listens to the plaints of an unhappy, yet still dignified, old lady. Even to non-Swedish speakers, this much is completely clear. The piece is punctuated and decorated with restrained and fascinating electronic sounds. Remarkable work.