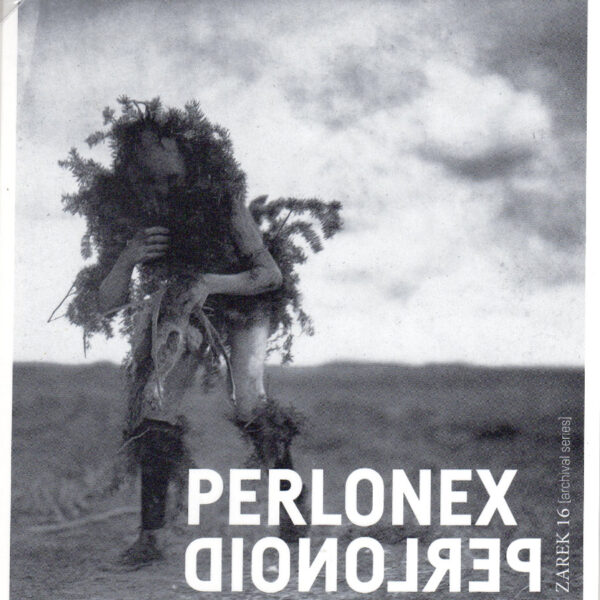 We could hardly accuse Perlonex, the Berlin trio of electro-acoustic players, of being excessive or prolific in their releases, and there appear to have been only six albums since their foundation in 1998, of which Perlonoid (ZAREK 16) is the latest. Even this is not exactly a contemporary document of their activities, as it was recorded in 2010 and constitutes an “Archival Series” release for this band. Burkhard Beins, Ignaz Schick, and Jörg Maria Zeger are the players, melding their skills with percussion, turntables, live electronics, guitars and close-miked objects into a densely woven fabric of grey droning sound.

This certainly isn’t the “reduced” playing we used to associate with Berlin, nor does it much resemble music that has conveniently been labelled with the (disputed and contentious) “EAI” tag. In fact on this occasion Perlonex come close to delivering a form of slowed-down industrial-flavoured noise, so grim and grey is its caste. On the other hand, they are still delicate and sensitive improvisers, and this Perlonoid morass is unlikely to be mistaken for Black Metal inflected avant-garde guitar drone at 100 paces. Instead, they pay close attention to subtly shifting dynamics in tone, timbre, and volume; and although the work may appear to be a largely unchanging body of sound, in fact it delivers small crescendos and climaxes at unexpected moments.

This was a live recording made at Sophiensale during a music festival in Berlin, all recorded in one take and with no overdubbing; the trio wish to make it clear that the great sound system at the venue, and the very receptive audience, spurred them on to these creative heights of endeavour. It’s about the most unsuitable cover art I’ve seen for a release in this genre, with its murky photo of some sort of grotesque Green Man figure performing an unknown vegetative rite. On the other hand, given the title, perhaps it’s supposed to be a post-modern update on the famous Black Sabbath LP cover for Paranoid. The trio have rubbed elbows and crossed swords with Keith Rowe, Charlemagne Palestine, and Mike Cooper – the latter of which will also be showcased in a forthcoming release in this series. From 25th January 2017.