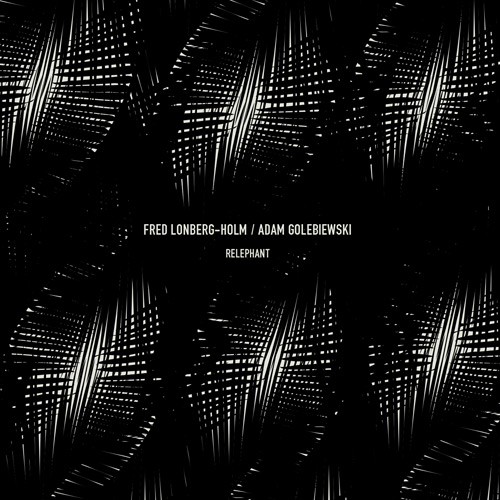 We were pretty impressed by Adam Go??biewski’s solo record Pool North in 2016, a percussion set with a memorable image of hammers and tongs on the cover, to provide a visual analogue of what this Polish madman does with his drums and percussion instruments. Here he is on Relephant (BOCIAN RECORDS NO NUMBER) teaming up with the American cellist Fred Lonberg-Holm, a string-playing jazzer who can do no wrong in these quarters. It’s a fine set of ugly noise and sprawling free playing, full of abrasive scrapes and completely tuneless clattering, not too far away from the splurgy messiness we often hear on the American Public Eyesore label.

Go??biewski has been represented in an “improvising” context in his career, but he likes being unconventional and wants to really push the envelope of what qualifies as “drumming” in this already over-crowded territory, intent on making his work stand out with highly unusual sounds and very aggressive mode of attacking his equipment. On this record, the Pole’s frenetic actions appear to have spurred the American cellist to aim even higher; he has rarely been as noisy and nasty on record before. It helps that he’s adding some live electronics to the mix, often belching out very impolite and socially unacceptable gobbets of inhuman noise. It impresses me that they’re able to keep up these degrees of intensity and energy while still leaving a lot of air and space in the music, and it allows us as listeners to savour the grotesque shapes and twisted forms that are constantly arising and mutating before us.

This music ought to be used in boardrooms and conference centres everywhere, or even as background music for Skype calls; if it was, everyone in business would get a lot more work done and meet a lot more deadlines. From 4th January 2017.