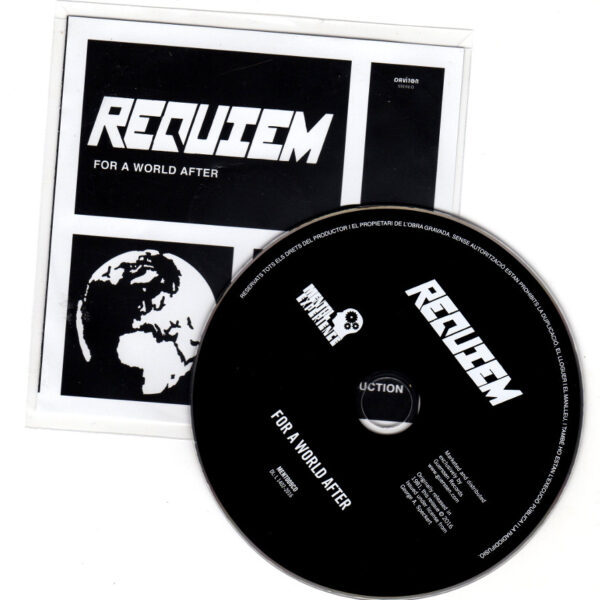 Not massively impressed by the LP For A World After (MENTAL EXPERIENCE MENT009CD) by Requiem, despite its very credible provenance…originally released in 1981 on a small and short-lived German label Daviton Records, this is a very ordinary album of library synth and drum machine music created by George A. Speckert who plays all the keyboards, occasionally joined by mediocre guitarist Massimo Grandi from Italy. It’s a concept album too, which may not sweeten the deal, telling the story of the “world annihilation through nuclear war”, a theme which is reflected in the titles (‘Destruction’, ‘Devastation’, et al.) and the mood of the music, which is unvaryingly morose.

I suppose the overall sound isn’t that objectionable, but it’s like a fourth-division copy of Tangerine Dream, with little innovation or original ideas to lift it above the morass of any other late-1970s Euro-prog synth escapade. Speckert has no talent for a memorable melody, the music is clunky, and his rudimentary keyboard skills are unlikely to attract epithets such as “deft” or “nimble”. The record’s bid to express an epic storyline of some sort feels more like an attempt to conceal the complete lack of structural form in Speckert’s work; his tunes just crawl along with no development or resolution. More to the point, For A World After fails to communicate its grand themes, and does nothing to live up to its pretensions.

The label Mental Experience specialises in reissuing progressive rock, krautrock and other rarities of 1970s and 1980s music, and while I’ve enjoyed some of them, I must keck at the notion that this bland release is “electronic Kraut” worthy to hold its head alongside albums by titans such as Klaus Schulze, Conrad Schnitzler or Moebius. The Daviton label’s other scant achievements in the early 1980s are equally far from inspiring; Künstlerportrait was a sampler LP of electro-pop duds by nobodies, and the Daviton Rocksampler Nr. 1 branched out into funk and rock. There’s also the double LP Forces Go Folk, which has a comical cover and looks as though it might be members of the armed services trying to do folk songs on their furlough. Hmm! These are not the signs of a good pedigree for a label. Yet originals of the Requiem LP are fetching crazy prices among collectors. Save your cash…avoid this gloomy clunker. From 9th February 2017.