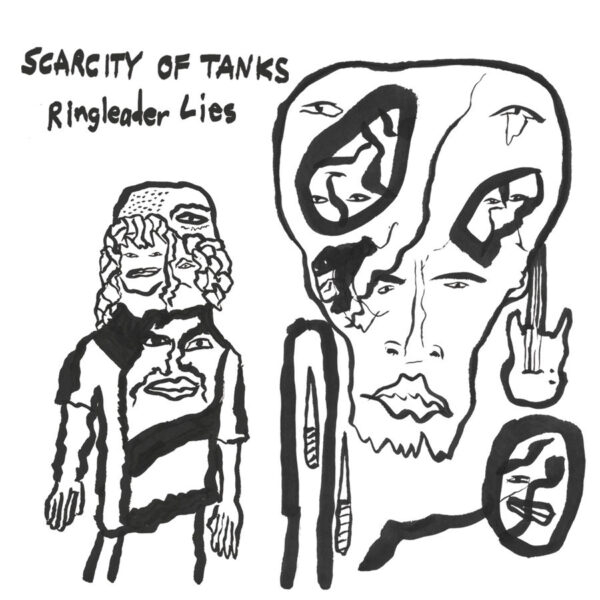 A little off course I know but any musings about Ohio are still invariably shaped by that back cover photo found on The Modern Dance: a row of industrial chimneys resembling church organ pipes belching out acrid smoke, while a near spectral figure shambles by in the foreground. Four or so decades later, anyone stirred by that nightmarish image and naturally outfits like Ubu, Tin Huey, The Bizarros, Devo et cetera would do well to investigate the tracks left behind by these tanks. They’re a floating/informal pool of Ohio (and beyond)’s finest avant garage/garage practitioners, who were formed back in 2004 and have in years gone by had within their ranks underground legends such as Jim Sauter (Borbetomagus), Weasel Walter, The Electric Eels’ John Morton, and the kissed-by-genius guitar of Tom Herman, ex Ubu-man and Tripod Jimmie leader. Behind these now almost annual general meetings, (this release being the seventh), is vocalist/founder member Matthew Wascovich. In fact, it’s his voice that is the sole unifying element, that slouches, scowls and yammers throughout the entire shebang.

With seventeen hired hands ready to scramble, including Doug Gillard (Death of Samantha), Scott Pickering (Prisonshake/Puff Tube), Cobra Verde’s John Petkovic and Andrew Klimeyk (x blank x), things can get pretty involved permutation-wise, with only the high octane “Over and Done” “The New Creations” and the Televisionesque “Oh Memory” employing the same line-up. But… how can there be any misgivings about a lack of continuity when encountering something as vital and subversive to the dreaded norm as Noah Depew’s berserk fretwork treatments on “Trees”, the weird stiff-jointed hunk of “Histamine Bunker”, or “Mentor Screws” which surely emanated from the same dungeon of despair as the Stooges’ “We Will Fall”. All guitars should sound like this!! Speaking of which, it’s all down to yet another master class in engineering, mixing and mastering by Paul Hamann, coming from the legendary Suma Recording Studios, Painesville, O-hi-o. Add to all that the head-scratchingly obtuse lyrical concepts of Mr. Wascovich, which could’ve called upon certain cut-up techniques, and we have a disc that sits very nicely within “The Buckeye State’s” rich lineage of post punk rock’n’roll.