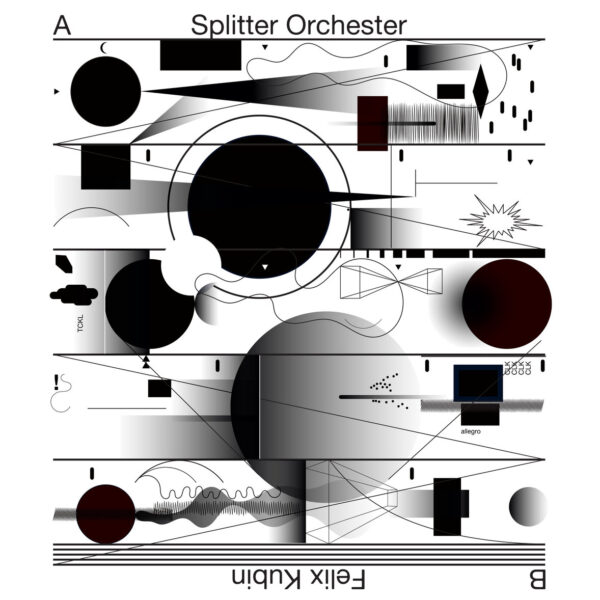 Excellent split LP Shine On You Crazy Diagram (GAGARIN RECORDS gr2036), the A side of which is occupied by Splitter Orchester, while the B side is Felix Kubin, the German electropop genius.

Splitter Orchester are a very good chamber ensemble based in Berlin – from their website it looks like they play an intriguing mix of woodwinds, stringed instruments, brass, and percussion, along with some electronic elements. In fact from that photo it looks like serious concentration is the order of the day. They sit down and they get into the zone. That sense of focus, of near-meditational trance state, comes across on their cuts here, simply called ‘Diagram 1’ and ‘ Diagram 2’, though you can also get ‘Diagram 3’ if you purchase the digital download version. ‘Diagram 3’ (which happens to be included on my promo CD) in particular reminded me very much of Stockhausen’s Aus Den Sieben Tagen, with its diffuse, half-directed drones and clusters of strange drifting tones. The Splitters are all about “improvised composition”; they work without scores, and align themselves with everyone from John Cage to the Gruppo di Improvvisazione Consonanza. Unlike some, they don’t fear to tread into the area of noise, and they can summon up a threatening rumble if the occasion demands it. I once suggested that perhaps the French ensemble Orchestra National de Créations, Expérimentations and Improvisation Musical were well-placed to supplant Zeitkratzer as “the” hot avant-orchestra of the hour, but now it seems that fellow Berliners Splitter Orchester are ready to have a shot at the title. Reinhold Friedl has already nominated a date for the bout.

Felix Kubin turns in a couple of electronic noodlers, the entertaining ‘Lückenschere’ which has a beat, and the oddity ‘Lichtsplitter’ which doesn’t. ‘Lückenschere’ is not contending for the Kraftwerk imitation stakes, nor is it likely to be mistaken for “minimal Cologne techno” or some such; Kubin has too much warmth and humour for that, and his drum-machine beat is endearingly clunky. On top of it, the rag-tag of unusual sounds and loops he collages together reveals more unlikely details every time you spin it. Plenty of unexpected noises on ‘Lichtsplitter’, which meanders about in a seemingly harmless fashion with its swishing wind effects, typewriter dings and clicks, and eerie theremin-esque lines. I always think Kubin has great fun assembling and performing his music; it certainly comes across that way. Both of these are supposed to be “reinterpretations” of the Splitter Orchester tracks; the intention is to counter the sleep-walking drones of the Orchester with a more systematic approach. ‘Lichtsplitter’, for instance, is called a “pure electronic blueprint” of ‘Diagram 2’. I love the idea that one could extract, or create, a “blueprint” from what is essentially an improvised piece of music, and then recast that information into electronic form. What puzzles me is that he did it by converting a drawing of a musical score into sound material, using a light scanner. I thought the Orchester claimed not to use scores, as a matter of policy? Maybe he made one up for the occasion.

It remains just to add an aside on the title, evidently a witty reference to the song which appears on the Wish You Were Here album by Pink Floyd. The original lyric by Roger Waters was supposedly a tribute to Syd Barrett, the original founder of the group. Me, I can’t think of a less fitting homage to that wayward genius than this song. Waters, in spite of his good intentions, seemed to completely miss the charm and delicate expression of this fragile mind, and by the time the band had added their parts, the song had become a heavy-handed rock anthem to mental illness, peppered with vulgar hippy slang, dumb slogans, and bad poetry. For this Splitter/Kubin LP, I suppose the “hero” is not an acid-fried rock star, but rather the “diagram” itself that is the core of the music; as performed by the Orchester and than reinterpreted by Kubin. The “shining” part may be an oblique way to reference the light scanner mentioned above. Waters and the Floyd failed to give Barrett an authentic voice on Wish You Were Here, but on this LP the craziness of this musical core is given ample chance to express itself effectively, and in every way the release can be considered a complete success. From 17th February 2017.