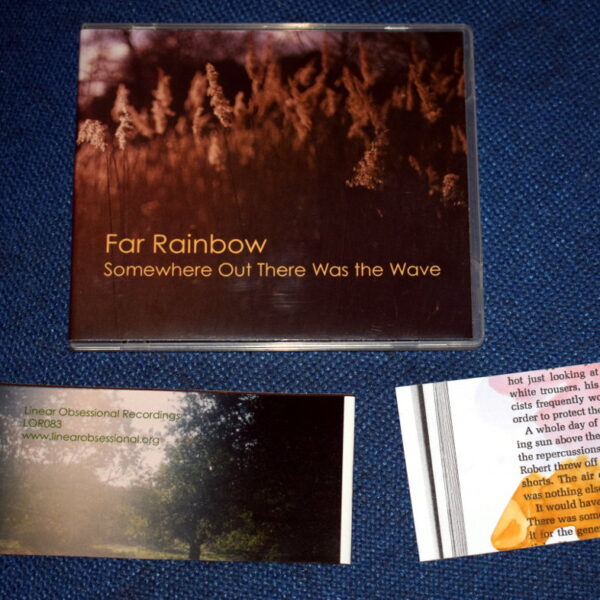 Last heard from English electronics-drumming duo Far Rainbow in 2016, with their cassette No Medicine That Can Cure A Fool, the first release on their own Zero Wave label. Emily Mary Barnett and Bobby Barry have been developing and enhancing their act such that they can now produce and sustain a single performance for best part of an hour, as is evidenced by the duration of Somewhere Out There Was The Wave (LINEAR OBSESSIONAL RECORDINGS LOR083), which is a single 51-minute piece which gradually grows, swells, and washes over you like a benign tidal wave. It’s a simple combination – lightly distorted electronic drone-noise from Emily, with extremely dynamic drumming patterns from Bobby. He keeps coming up with new ideas and enriching the flow of the music, never content to stay in the same place for too long. You can feel the pair of them working their way into a very transcendent place, an effective trance state, and this passes on to the listener too – “almost overwhelming” is how the press notes describe it, especially with reference to their live set where I assume the whole thing is further boosted through loud amplification and (hopefully) psychedelic light shows. I see the cover art (and the title) continue the ocean-dwelling themes suggested by the No Medicine tape, and evidently Far Rainbow want us to experience the full immersive sensations of living beneath the sea and contemplating the unusual life forms, vegetation, and constantly-shifting environment of the undinal realms. Perhaps they originally come from Atlantis, or they’re a couple of mermaids/mermen. From 2nd March 2017.