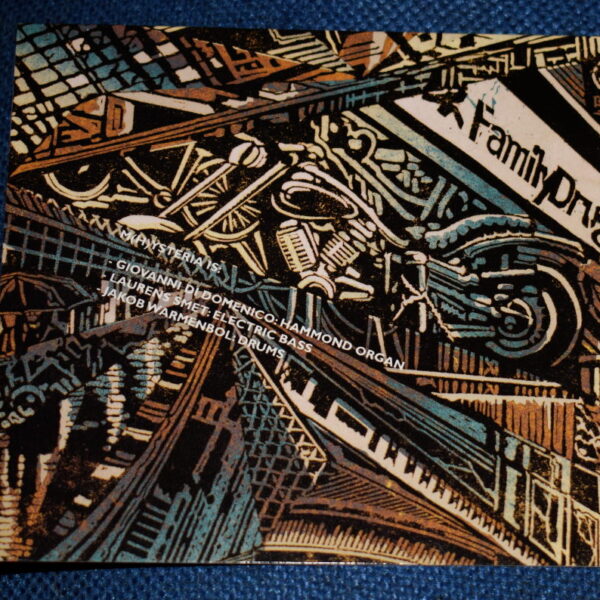 I loves me a good Hammond organ record, particularly when it’s heard on solid 1970s prog “classics” or wielded by hairy Germans in certain Krautrock bands, such as Ikarus. 1 My all-time Hammond hero is the great Keith Emmerson and I always think he understood the propensity of the Hammond – it is a gigantic, lumbering beast of unwiedly proportions, and it would make today’s laptop-carrying snowflakes shake in their sneakers – to make a really ugly noise. To experience some of his best growlings, you need only hear Pictures At An Exhibition (one of the most reviled yet best-selling prog LPs ever) for some choice moments of genuinely menacing keyboard and speaker cabinet abuse.

I am thus in “hog heaven” with today’s record by M(h)ysteria, a trio from Belgium making their recording debut with Family Drug (JVT0017) on the label Jvtlandt which appears to be based in Denmark, though the CD was sent to us from Oita in Japan. The trio is Giovanni Di Domenico on the Hammond, with electric bass guitar from Laurens Smet and drumming by Jakob Warmenbol. It’s a highly enjoyable record where the good old greasy Hammond is led through several paces by its talented player, dipping his tootsies in the oceans of jazz, fusion, prog, krautrock, and some sort of outer-space cosmic thing that leads him into experimenting with far-out foreign sounds, most of which I assume are available to those who have mastered the drawbars, tonewheel and pre-sets of this two-keyboard monster. The above lessons about “Emmerson’s Noise” are certainly not wasted on Di Domenico, and he’s capable of huffing forth some deliciously grotesque bellows in that area.

I dig the uplifting and energetic sound on this record, especially with the solid and lively rhythm section who “cook” as surely as a Tricity wall oven. Yet M(h)ysteria have a darker purpose, and the subtext to the record is to make a comment on the pressures of contemporary life, which they see filled with “chronic tensions…inherent distractions and mounting stress”, a description that’s grimly accurate to be sure…even the future is “glittering with menace” according to their collective prognosis. This turmoil is expressed in visual terms by Simon Fowler’s chaotic cover art, where people, buildings, transport and all manner of objects are competing for space in a fitful jumble of confusion. In this context, the powerful music of M(h)ysteria takes on a pessimistic hue; each tune often seems to be forging ahead at a rate of knots, but now it’s clear that they do this simply because they can’t stop; life has become a juggernaut, an express train we can’t get off. The destination for this journey is far from clear, but you can be certain it’s going to be calamitous when we arrive. What I first heard as raw excitement in the music, especially the sizzling first track, may turn out to be sheer panic.

Giovanni Di Domenico is an Italian composer and piano player, currently in Brussels, and he’s played with some of our heroes – Chris Corsano, Tetuzi Akiyama, and others, besides running the Silent Water label. Smet rocks the bass like a veteran from the prog wars, but he’s also a composer and conservatoire-trained, plus he’s well represented in European free improv and jazz circles. Drummer Warmenbol likewise graduated from Antwerp and is a member of bands with great names such as The Unrevealed Society and Ridiculum. The three players thus have very respectable pedigrees, which may account for the assured playing on offer here. Recommended. From 8th March 2017.