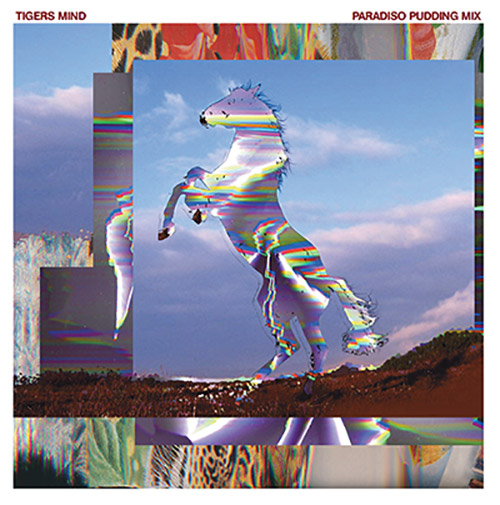 Real nice dose of try-anything free blat from a Scandinavian trio designating themselves Tigers Mind. Their Paradiso Pudding Mix (JVTLANDT JVT0015) is pretty much their first real outing, unless we count The Fish Tape EP which they self-released earlier, so obscure that we can’t find out any facts about it. Besides the nutty title to this release, there’s also the wild front cover art which dares to answer the question “what if Dali had been a video artist?”, plus suggestive tune titles such as ‘Uncertainty Matrix’ and ‘Magma Holtz’.

Using just sax, drums, and electronic spew these three Nordic funsters are capable of brewing a decent ear-splitting racket which lifts off from zero-to-sixty in nothing flat, but they’re attempting a lot more than that…like every other hopeful nowadays, they profess an interest in many forms and genres of music, and are broadly aiming for some new twists on the areas of free jazz, improvisation, and electronic avant-garde composition, with at least one beady eye edging over to the well-trod corner marked “noise”. In their case, a lot of the effort is directed towards strong extremes of volume and activity, which effectively means there are multiple instances which will knock you out of your perch with their loud volume and frenetic action, as contrasted with the more detailed, exploratory and quieter passages. They’re also great at leaving strange gaps in the performances, torn-out holes that leave us slightly puzzled in a good way, false starts and false stops.

While all this may strike you as contrived as all-heck, I think the Tigers are going at it with a real determination, working hard to create something genuinely innovative. I feel a band are onto something when the results are mystifying and odd, as though not even the makers know quite where they’re going with it, and at such moments we glimpse genuine freedom through the cracks. Such a vibe emerges for me on today’s spin of this particular pudding mix. The makers of the mix are Danielle Dahl, a frankly superb saxophonist who knows when to shut up and when to rend the air with harsh squeals as the occasion demands. Hear more of her in the band Moonbow, or on the Danish label Abstract Tits. Drummer Thomas Eiler also plays in Danish quartet Svin, another free jazz combo. He’s credited here with providing a “metallic sound” from his drums. Lastly there’s Niklas Adam, a guitar and electronics whizz who generates exciting sparks and crackle from his set-up – terms such “harsh and unwieldy” are on the press release, which also alludes to happy accidents (one of the many ingredients on which free improvisation relies, if the musicians were more honest about it). The trio have been doing it since 2010; this release deserves your attention, feels genuinely exploratory and not out to please anyone. From 8th March 2017.