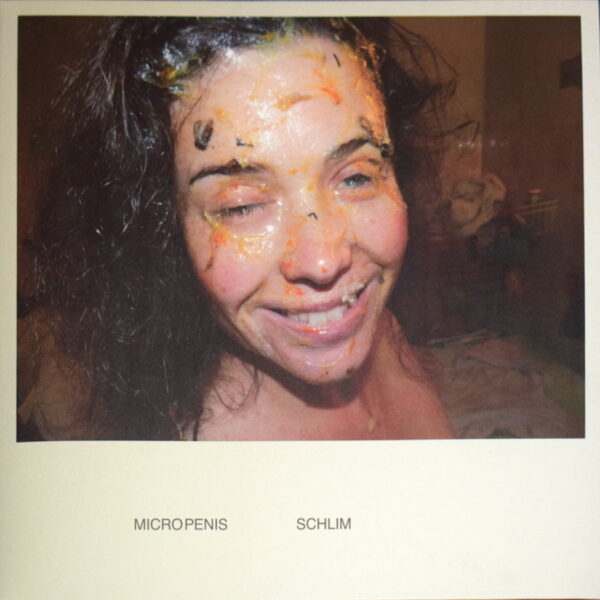 Another exceedingly ugly-beautiful record by Micro_Penis, the transgressive European group formed of Ogrob, Spenelhauer, Kittel and Heyer. Previous impressive and nightmarish exploits by these loons have included Tolvek and Der Trompeten Sauber, both of them provocative and unsettling examples of their craft, yet not without much black humour – a trait which characterises a good deal of Ogrob’s solo work and other collaborations too. Today’s record Schlim (DOUBTFUL SOUNDS DOUBT14) arrives in an amazing cover of weird body-art which made me think it was going to be volume 2 in a series which began with Diffusions Intradermiques Et Enregistrements En Cavités Corporelles. It’s nothing of the sort of course, but it so happens Schlim also features a woman’s body, this time covered in slugs and slime. More about the work of Anne Zimmermann shortly.

On the grooves, Micro_Penis once again exhibit their taste for turgid, repellent music and noise, operating in some uneasy zone between a species of free improvisation and their own take on electro-acoustic sound generation. What this means in practice is that we hear wind instruments blown in comedic, non-musical fashion to create farting sounds, human voices shouting and moaning as if in great distress, and astonishingly bold eruptions of electrical noise-bursts. The nauseating sounds somehow coalesce, but they’re always separating out, much like egg yolks mixed with vinegar in a recipe of raw foodstuffs that you really don’t fancy eating. I still can’t escape the sense that Ogrob and the crew are making a mockery of “serious” music in some grotesque way, yet their results are always convincing and authentic on their own terms.

The combined effect of all this intense activity is to unsettle the listener and indeed alarm us, creating a sense of constant menace and discomfort that won’t go away, even after the record has finished. Some of this comes from the uncertain nature of the sounds, the shocking screams of distress, and the abiding sense of a dark purpose at work that we can’t quite make out. There are also some lightly-suggested undercurrents of warfare, such as on the tracks ‘Kommandant’, ‘Fusee Dans La Mer’ and ‘U-Boat Le Periscope Aveugle’, all of which could be taken as short clips from a WWII movie that never existed and where the allies lost the war at sea. I’m taking it far too seriously though, as ‘Kommandant’ in particular is clearly meant to be a parody, with an exaggerated German nonsense-figure barking out orders in clipped tones. Anne Zimmermann is an Alsace-based artist with her own very distinct visions of human intercourse in society, and she explores ideas about intimacy and marginality in her work which crosses freely between video, installation work, performance art, and even ceramic sculptures. She has particular ideas about the importance of the slug in society, reminding us how this lowly creature contributes a lot to the regeneration of forests, yet we despise and neglect it. These themes may have some bearing on her cover images for this release. I’m more intrigued to learn about her fictional creation, Paula Orpington – half-woman, half chicken. Zimmermann apparently lived the role of Orpington for five years, wearing the skins of chickens, until her ritualised autopsie (staged as a piece of performance art) in 2010. I think I can see why Ogrob would be drawn to the work of this astonishing artist. From 20th October 2016.