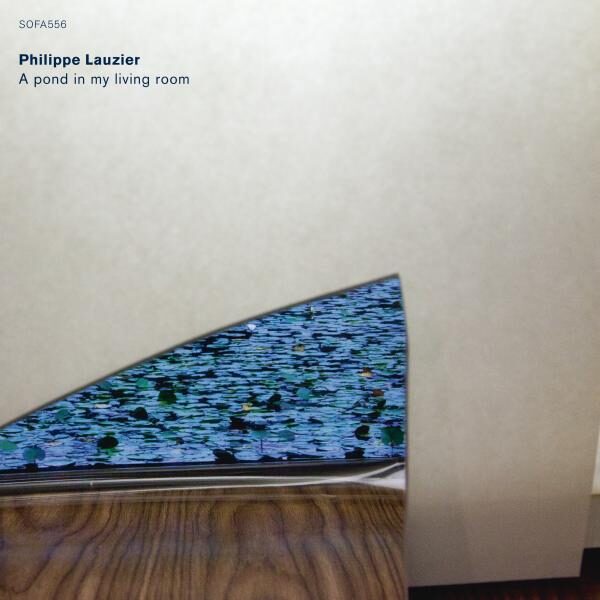 Montreal improviser Philippe Lauzier has been noted here in these pages many times, with his fine releases for & Records, Schraum, E-Tron and Tour De Bras. Quite often he has collaborated with other like-minded musicians, such as Éric Normand and Pierre-Yves Martel, and I would generally characterise his approach as quite rigid, disciplined, resulting in taut and focussed performances of minimal-ish improv. Today’s he’s here with a solo album A Pond In My Living Room (SOFA MUSIC SOFA 556), which was created by making multiple overdubs of his bass clarinet – a tribute perhaps to the methods of the New York pioneer Phill Niblock, who is given thanks in the sleeve notes. [1. If, Bwana also did multiple overdubs of a clarinet on Clara Nostra, of which the CD version came out in 1999 but which began life on the earlier Horns & Harart cassette from 1988.]

The results are quite beautiful, exquisite and subtle drones, surfaces, and pulsations which have a benign effect on the listener. Even the titles emanate tranquillity: ‘Water Sprinkling’, ‘On The Window Side’, and ‘Napping In A Neglected Garden’. I won’t say that Lauzier has created something completely new, but his calming music here feels much less programmatic than Niblock’s, by which I mean there is some space for intuitive decisions and not everything is ruled by the restrictions of a precise mathematical number-set. On the other hand, A Pond In My Living Room doesn’t much resemble free improvisation either, even while it is closer in spirit to his austere and abstemious works such as Transparence and Volume 2 (with Pierre-Yves Martel). And while I suppose it would be possible for a laptop musician to get to a similar place using electronic tones and a mixing desk, it wouldn’t be the same; the breath of the musician is evident on virtually every minute of Living Room, likewise the shifts and overlaps being created are the product of a creative mind, and nothing to do with a machine.

Lastly there’s the sheer effort involved in creating multiple overdubs, hard work which gives real depth and solidity to these works. One might almost liken this to a form of sound-sculpture, something physical you could see and touch, residing in an art gallery. Excellent. From 20th March 2017.