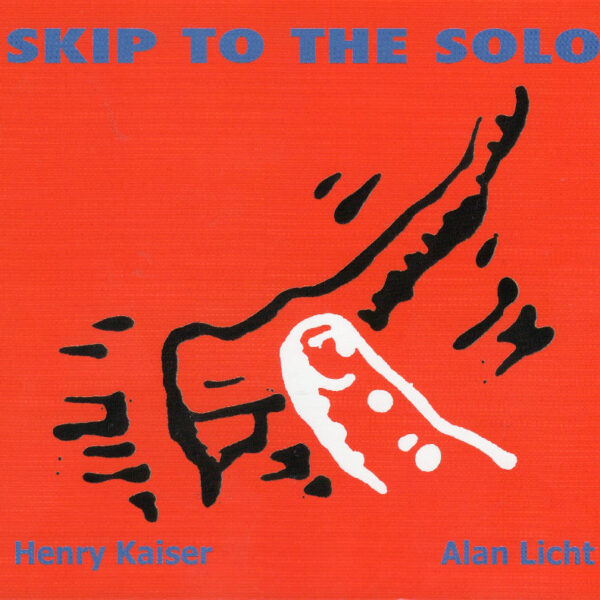 Over time Alan Licht (late of Love Child, Run On, Text of Light & solo) had been a fanboy, student and eventual friend of fellow avant guitarist Henry Kaiser, Grammy winner, film/t.v. soundtracker and veteran of over two hundred and fifty recorded ventures. Finally, after twenty years of talking about a collaborative project, the blue touch paper has been lit with an album whose title/concept refers to an idea that I’m sure many a guitarist with a vinyl deck will admit to. That is to by-pass the majority of the song’s structure and instead, make a bee-line to the solo (the longer the better!) and then noodle/jam on top of it. A bulk edit phenomenon that would’ve seen masses of songwriters flinging themselves off of the nearest available tall building HAD THEY KNOWN. In their younger days Henry and Alan participated in this heinous act of stylus-shifting too. Their tracks of choice being The Dreadful Grate’s “Dark Star”, Uncle Don’s “Alice in Blunderland” (all hail ‘the Winged Eel’!), “Down by the River”, “Light my Fire”, and other stretch limo pieces like “In Memory of Elizabeth Reed” and the “Agharta” prelude.

This concept was dusted down and developed during a gig in New York in 2015, as Henry’s idea that a few Lichtian chords could act as a foundation for him to “fuzz solo” all over was given the o.k. and Skip… was born. With alternating bass shifts, Rick Walker on drums and the splendidly named Mikko Biffle on third guitar (check him out on the excellent “Wong Dong Doodle”), there’s elements of loping afropop (“More or Less Cowbell”), impressionistic soundscaping (“Rendevous in Space”) and the inevitable avant blow-out (the three-pronged assault of “Infernal Affairs”), Skip… is designed to flow as a single piece. Ten second ‘tags’ of incidental audio act as the glue between the sudden starts and stops. Naturally The Faust Tapes is name-checked on the press release as is Zappa’s Shut up ‘n’ Play yer Guitar. Which is a little odd as I seem to recall Francis Vincent’s technique receiving a less than glowing end of term report from Henry when he took part in Wire Magazine’s ‘Invisible Jukebox’ feature some time back. Hmmm… both must surely be based on method alone then. Personal preferences aside for a mo’, brace yourselves for a git-box showcase crackling with electrickery and shorn of cliché. A major boon no less, for the entered apprentice anxious to embrace the unorthodox.