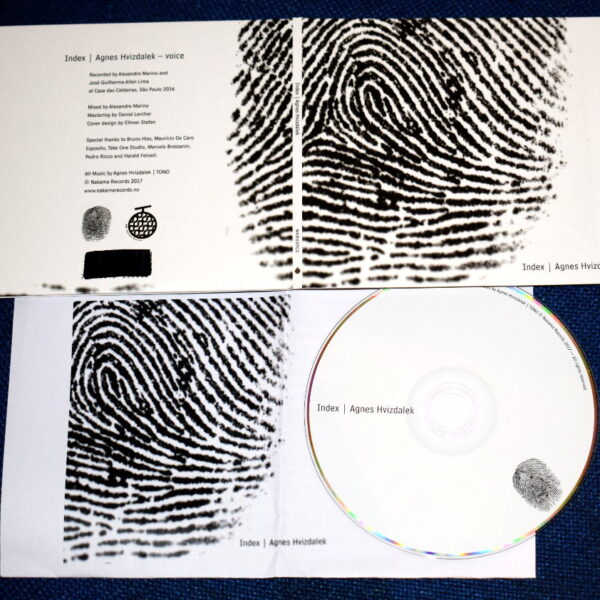 Pretty impressive solo voice record from Agnes Hvizdalek, a voice improviser – of which there aren’t too many in the world just now. Maybe it’s hard work to train your voice in this way. I sense Hvizdalek has certainly put the time in to hone her craft, develop her inner voice – not an easy place to get to. Austrian, she’s well known in Vienna music circles and performs in a trio there with Klaus Filip and Seijiro Murayama, and I think she studied under veteran composer Franz Hautzinger. But she moved to Oslo in 2008, and has made inroads into the improv worlds in that Nordic area, and connections with the Scandinavians may have resulted in release on this very refined Norwegian label Nakama which is run by the bassist Christian Meaas Svendsen. I say “refined” because I think he’s very choosy about who and what he releases, wishing to cultivate his notions of an artistic collective. Even the word “Nakama”, a Japanese word which has a very specific meaning denoting a non-hierarchical peer-reviewed relationship of some sort, is resonant in this context.

Agnes Hvizdalek made Index (NKM009CD) by using a factory chimney as her own personal echo chamber. That’s right, she did it in Sao Paulo when she had a residency there in 2016. Right there you’ve got evidence of an exciting exploratory spirit, not content with the stuffy conventions of recording studios or performance stages, actively seeking a new way to present her sound and actions to the world. Her adventurous frame of mind may also reflect the application of her work in settings that aren’t exclusively musical – film, theatre, dance, and performance art.

As she vocalises her way through this long (47-minute) piece, her voice transforms itself into an eerie sound that often is hard to identify as anything remotely human – growls, clicks, drones and sighs, but all rendered in a very subtle and non-assertive manner. I can’t fathom how she sustains it for this long, a feat of athletic proportions. We’re also advised to listen out for the natural sounds of the city and environment, which apparently leak into the record; so it’s partly a field-recording / documentary thing, with ambient noises of helicopters flying overhead and factory workers doing stuff in the background. (I couldn’t notice these on first spin, but will revisit for a closer listen).

I’d like to think the creative process that’s most relevant here is one of isolation, sensory deprivation…where the artist is forced inside herself, highly dependent on inner resources, as she shoves her bonce up this brick chimney, forced into a confined space, cut off from the world for an hour. I expect it was not quite so dramatic as that in reality, but even so I’m sensing this very private and intimate moment from the music, where in places Agnes Hvizdalek succeeds in communing with the darkest and most occluded parts of her inner self. If I am on the right lines, this same theme is expressed in the cover art, which is an imprint of her fingerprint. It’s supposed to embody notions of “the thin line…between privacy and publicness”, according to the sleeve note. From 20th March 2017.