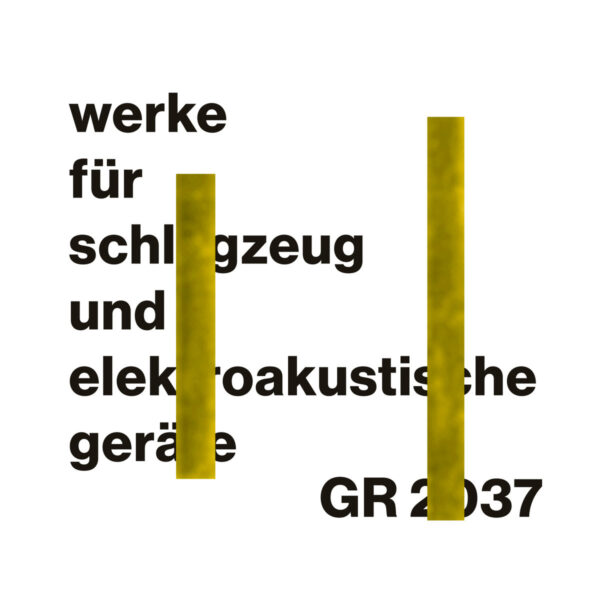 Werke Für Schlagzeug Und Elektroakustische Geräte (GAGARIN RECORDS GR2037) is an LP of modern percussion music performed by the Polish duo Milosz Pekala and Magda Kordylasinska. Its title translates to Works for Percussion and Electro-Acoustic Devices, which indicates their use of electronic music alongside their marimbas and vibraphones; and it was originally released on the Polish label Lado ABC in 2016, now reissued on Felix Kubin’s label with one track missing in action. The duo set their sights on performing 20th-century and 21st-century compositions, and as an index of their wide-ranging tastes they include everything from classical minimalist Steve Reich to rock-polymath Frank Zappa, taking in a couple of Felix Kubin compositions along the way.

It’s not a massively challenging listen, despite all the modernism on offer. Pekala and Kordylasinska are clearly very technically skilled, but I’ve rarely heard such a laid-back approach to performance; they seem incapable of delivering any tension or spring in their playing. Consequently, I find that Kubin, Reich, and Zappa are particularly ill-served; Reich’s ‘Vermont Counterpoint’ becomes a piece of friendly easy-listening in their hands, distinctly lacking that flavour of craggy New England ruggedness. Zappa’s ‘The Black Page #1’ is watered down into a wispy version of its original hyper-complexity, as the Poles simplify the original’s density, and peck and stab their devices in rather hesitant fashion. I know that non-devotees of Zappa hate the bombast of his music however, so perhaps this more user-friendly “conversational” approach is the way to go.

As to Kubin, his two parts of ‘Renaissance Gameboy’ are reasonably close to what I perceive as the playful intentions of this German genius, and these renditions do manage to remind us of Kubin’s love of chip-tune and computer game music. But I’m still feeling a certain tentativeness in the playing, and their overly close attention to following the score suggests a certain earnestness, and they could be in danger of missing the joke. The only time their relaxed style of playing succeeds for me is in the performance of ‘Smells Like Victory’, a very new composition by a very new composer, Thymme Jones, who also happens to be in an art-rock band called Cheer Accident. The piece includes electronic sound alongside the vibes, marimba, and gong, and arrives at something far more opaque and mysterious than the duo manage on the rest of the record. I wish they’d brought this slightly darker quality to their playing of Reich in particular, who I think needs more light and shade in his work to bring it into relief. Milosz Pekala and Magda Kordylasinska have impeccable credentials, classical training, and work experience, and have been well respected in Poland for over 13 years; they used to perform as Hob-Beats Percussion Duo. This, from 20th March 2017.