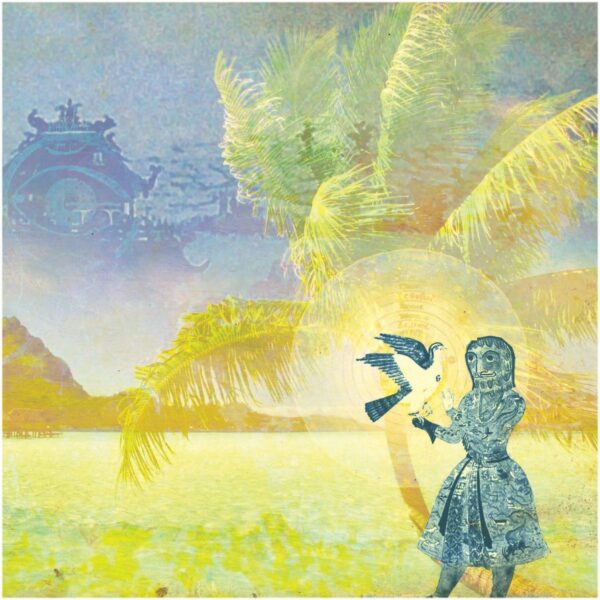 The Lickets are the American duo of Mitch Greer and Rachel Smith from San Francisco, whose electronic-ambient music we have enjoyed over the years, even when they’ve been in danger of producing rather twee droning sounds. Currently they seem to be touting their offering as “experimental folk”, and this seems to fit in nicely with today’s record. With Offering To Magnetic Mountain (INTERNATIONAL CORPORATION NO NUMBER), I find I’m enjoying the flirtation with rather dark and profound themes which this record seems to be attempting; and the variety of the tracks, meaning that the whole album generates an interesting episodic experience.

Both of these impressions can be explained, or at least accounted for; Offering To Magnetic Mountain was originally intended as the soundtrack to a “folk horror film”, a project that went as far as having an entire narrative and script outline. It seems that the film didn’t quite make into production and the script idea fell by the wayside, but the music went ahead; it retains some radio-play elements, hence the atmospheres and the episodic structure. Even so, I would guess that traces of the story have survived in the very narrative track titles, each of which stands as a chapter to a fascinating mystery-fantasy book that was never written; for instance, ‘The Monsters Descended from Above’, ‘Faces Of The Forest’, ‘Botanical Illusion’ and my favourite ‘Human Manufacturing Society’. That last one ought to be used to pitch a Hollywood low-budget movie.

The other thing Greer and Smith are experimenting with is early music, a form of inspiration which is reflected in the choice of harp, flute and guitar on certain tracks, creating music which, though not exactly a direct of John Downland or Carlo Gesualdo, at least keys into the horror-story theme in an oblique way. What I mean by that is that I can connect the early music vibe with the image of the fellow on the front cover who is wearing Renaissance garb and may also be a falconer (see track 11, ‘Falconer’s Day Spa’), though his face looks about as determined and ruthless as any adherent of the Machiavellian approach. Perhaps he might be an Elizabethan magus like Dr John Dee.

In this way, The Lickets meld tunes and melodies with their more noisy and atmospheric pieces, taking in some primitive electronic bursts along the way; one stand-out track in the latter mode is ‘Offering to an Ancestor’, which in a roundabout way manages to hit some Radiophonic buttons too, so is entirely appropriate for this particular project. And yet they’re not even English, so perhaps not obsessive devotees of Delia Derbyshire. When will The Lickets be invited to submit work to The Ghost Box? Soon enough, on the strength of this release. From 30th March 2017.