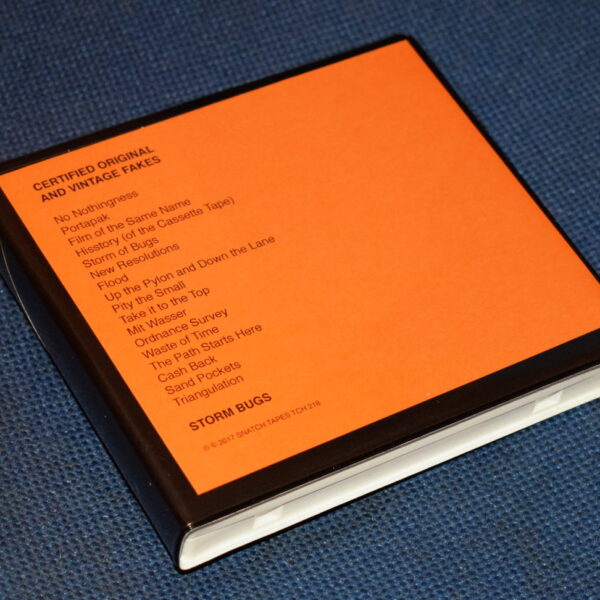 Excellent album by Storm Bugs, the team of English synth-electronica-noise cassette geniuses Philip Sanderson and Steven Ball, in the form of Certified Original and Vintage Fakes (SNATCH TAPES TCH 218), which contains 17 all-new substantial songs and tunes…they did it over six months in 2016, where they would collaborate on making a new download single every month, presumably destined for release on their Bandcamp page. It’s not entirely clear if they even met up for this production; a piece would start as a synth instrumental in Sanderson’s Hastings HQ, then would be sent to Ball in Lewisham where he would add his lyrics and singing. Sanderson might rehash the piece a third time, thus pointing to a process where each piece emerges in mosaic fashion.

Now, all of these “dingles” 1 have been compiled in one place to create a species of new release, which is most welcome. I don’t think we’ve really heard from Storm Bugs since the 2007 Supplementary Benefit record, itself a compilation of their shiniest moments from the late 1970s and early 1980s. On the other hand, some of their solo records have reached these shores in recent years – Philip’s Seal Pool Sounds, for instance, or the remarkable Hollow Gravity LP; and Steven’s conceptual-song work has been well represented, of which his Life Of Barrymore is probably the most successful example. I mention these as signposts which might say something about how they’ve developed their respective musical identities since they first worked together as a duo, and how these developments now feed into what might be referred to as Storm Bugs 2.0.

Ball’s penchant for oblique, semi-ironic and tricky layered lyrics is much in evidence on Certified Original and Vintage Fakes, his songs offering puzzling snapshots of 21st-century man adrift in a desolate urban world, but doing so with candour and wit, rather than in some self-pitying and horrified “industrial” manner. Alienation might be the theme, but Ball seems to be telling us not to worry about it so much. One song appears to tell the tale of a citizen who’s completely lost without his mobile phone, with no basic awareness of the time of day, or even where he is. It’s a sad reflection that the more technology we have, the more our innate human senses and faculties become disabled and disconnected. Again, Ball doesn’t seem overly troubled by this trend in our culture, but his deft lyrics ponder the absurdity of it with a detached bemusement.

Speaking of technology, early Storm Bugs used to make a virtue of having almost no technology at their disposal; I say this, in spite of Philip’s mastery of analogue synths such as the VCS3 and Synthi Bug. They were able to create fascinating, innovative noise from biscuit tins and sticky-back plastic, pretty much…now, they’ve mastered digital tools, but somehow found ways to subvert these tools, producing music that still sounds slightly clunky and unfinished. Not only is this incredibly endearing, I regard it as a major virtue. I suspect it’s far too easy to create sounds and music that sport a “professional” sheen on today’s workstations; but it takes a real genius to figure out how to hack into that interface, and make the toys spew out some lumpy, ungainly synth-burble.

Loving the songs, the tunes, the sounds, and the noise so far…and also the themes and references which might have been purposely embedded to keep us clue-spotting reviewers happy. At least two pieces here refer to the materiality of cassette tapes, and the materiality of film. These are far from random choices; let’s not forget that Philip’s label, Snatch Tapes, was one of the many pioneering cassette labels in the early 1980s, and carved an important niche into self-releasing indie history thereby. As for film, I know that both the Bugs have a history of close associations with avant-garde cinema, specifically the English school of the London Film-Maker’s Co-op (home to Gidal, Le Grice, et al); a school which made a virtue of constantly emphasising the materiality of celluloid as it ran through a projector.

If looking for further musical sign-posts, one reviewer sums it all up with Brian Eno; I would add David Bowie, Bill Nelson (after Be-Bop Deluxe, when he produced no end of solo synth-pop albums), Sudden Sway (just on the basis of one track, with its multiple overlapping whispered vocals), Kraftwerk, The Residents, and maybe even Sparks. Except that Storm Bugs have their own idiosyncratic take on all of these influences, and oodles of their own original ideas to boot, and there is not a hint of pastiche or copy-catting in the air. Packaged in a thick “vacuum box” with a bewildering colour insert of text and images, this is the best conceptual synth-pop avant-noise album you will buy this year. From 28th March 2017.