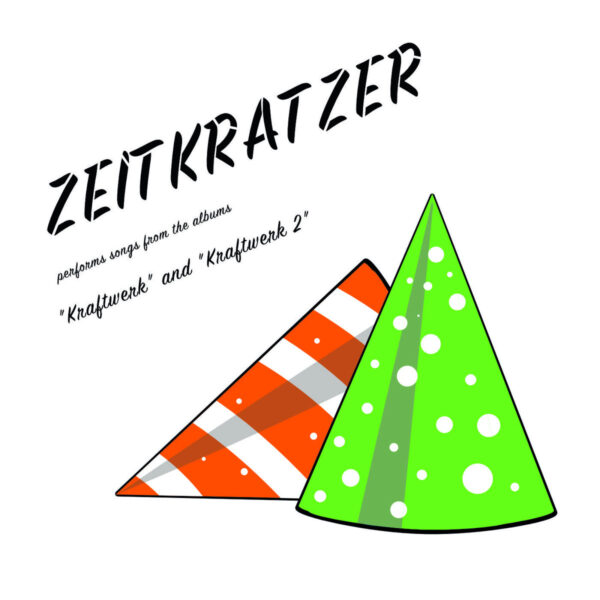 Reinhold Friedl’s exceptional chamber combo Zeitkratzer show no signs of ceasing in their ongoing plan to “re-interpret” 20th century music on their own terms, having “done” the music of internationally famed avant-garde composers as well as notable electronica and underground noise artists. On their latest production, it’s the turn of Kraftwerk; on Performs Songs From The Albums “Kraftwerk” and “Kraftwerk 2” (ZKR0021 / KARL RECORDS KR035), we hear versions of ‘Ruckzuck’ and ‘Megaherz’ from the first traffic-cone LP, and four tunes from the second one, including the (nearly) side-long ‘Klingklang’ that Ralf and Florian also used to name their studios.

‘Klingklang’ is probably the best piece here; it’s flawless in design and execution, and emerges as a beautiful piece of music. But it also contains Friedl’s penchant for contrivance; even the varispeed effect of the original tune, produced by studio methods of tape-manipulation, is reproduced here by the Ensemble who have clearly been trained how it to play it in real time with no studio inerventions. This means presumably that the speeding-up effect was written directly into the score they were playing from.

Reinhold Friedl has previously taken great delight in re-scoring all electronic music in a way to make it playable by his small acoustic chamber ensemble; when he did it for Metal Machine Music, the production of the score alone appeared to be a super-human task, but it was achieved with the help of computers and some highly diligent transcription experts. I suppose one element that’s interesting about the first two Kraftwerk LPs (and the next LP, Ralf and Florian) was that in 1970-1972, Hutter and Schneider weren’t yet completely electronic, and originated a lot of the music with non-synthetic acoustic instruments, including memorable use of the flute. Indeed it’s the flute parts that, for me, rise to the surface of this Zeitkratzer concoction, performed to perfection by Frank Gratowski.

The other thing I noticed is that even the track timings here are often a close match to those of the original records; in the case of ‘Klingklang’ there’s a variance of a mere eight seconds. This suggests that the original albums were used quite doggedly and precisely as a template for the production of these works. You might almost call them near carbon-copies, and yet for all their accuracy there’s something missing in Zeitkratzer’s renditions. I think it might be something as simple as Ralf and Florian’s simple sense of joy, an enthusiasm for exploring what was new territory in the 1970s, coupled perhaps with a slight uncertainty as to where their explorations might lead. It would be a few years before Kraftwerk would settle into the synth and drumpad method and the tunes for which they have become famous, to the point that the Kraftwerk are now locked into an assembly-line production of their own catalogue for live festivals and shows.

Another line of thought that might be worth exploring is the connection between Kraftwerk and European classical music; they themselves wanted to tell us something about the music of Franz Schubert in 1977, perhaps reminding us of some distant Romantic connection, and I wonder if it’s significant that Zeitkratzer are now doing something that stands a chance of dragging Kraftwerk back into a classical milieu. It depends if this set, recorded live at a prestigious music festival in Marseilles, ever makes it into a formal concert hall. But there I go living in the past again; it’s doubtful whether such arenas exist any more, and it’s likely that Reinhold Friedl’s plans are far more nuanced than to make any clumsy attempt to blow the dust off labels and genres that barely have any meaning any more. The cover art transforms the famous (please, don’t anyone tell me they’re “iconic”) traffic cones into party hats, conveying a sense of whimsy which is otherwise not present on the album. From 20th March 2017.