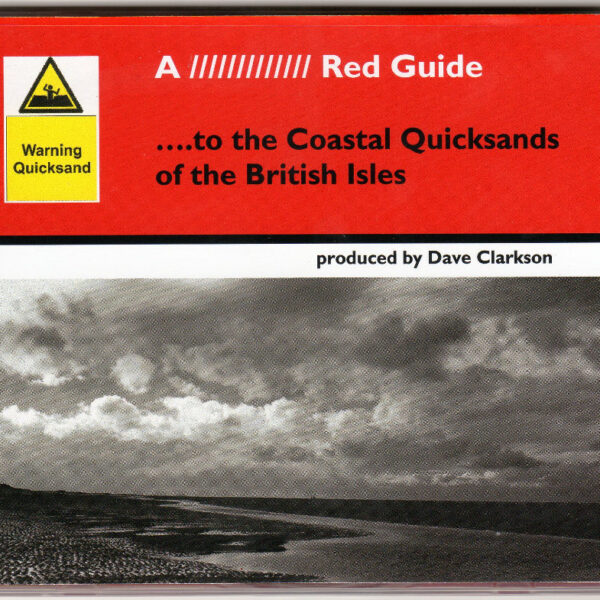 Last heard from Manchester-based Dave Clarkson with his 2014 album Music For Lighthouses…he’s followed it up with a continuation of sorts called A Red Guide To The Coastal Quicksands of the British Isles (LINEAR OBSESSIONAL RECORDINGS LOR087), in which we hear further electronic portraits of the lonely and horrifying seasides of the UK, rendered as abstract/ambient sounds, low key drones and murmurs, occasionally offset with field recordings of the lapping sea.

These location recordings included such inhospitable places as Morecambe Bay, The Cumbria coast, and Port Isaac in Cornwall, all of them evidently rich sites for psycho-geographers such as Clarkson seeking pools of negative energy, buckets of despair, and suicidal thoughts. Clarkson is not intent on annihilating the human race, I would hope, but he is clearly drawn to these empty and vacant vistas, and succeeds in capturing and expressing a certain essence that confirms his bleak take on life. The work is further enhanced with his highly subtle electronic interventions, and succeeds admirably in conveying “the understated but immense power of the sea”, as the press notes would have it. An English writer who understood all of these themes very well was M.R. James, and he expressed them in literary form very well in the ghost story ‘O Whistle And I’ll Come To You My Lad’, a story which some readers may know better through the Jonathan Miller filmed version starring Michael Hordern.

Dave Clarkson’s Red Guide is perfectly aligned with same, and while I wouldn’t be so crass as to suggest his CD would make a “great soundtrack” to the Miller film, I hope I am understood. The cover art, with its landscape-orientation photos of the beach under heavy clouds (all shot in black and white, of course), further advances the themes, as does the inclusion of various “Danger” stickers in the package. I would be very interested if Mr Clarkson would be pleased to continue his work by looking next at the problems of beach pollution in the UK, for instance making an album that looks into the lamentable fact that our bathing water ranks as one of the all-time worst in the EU beach league table. A chilling delight of artistic-ambient cold electronics….from 27th March 2017.