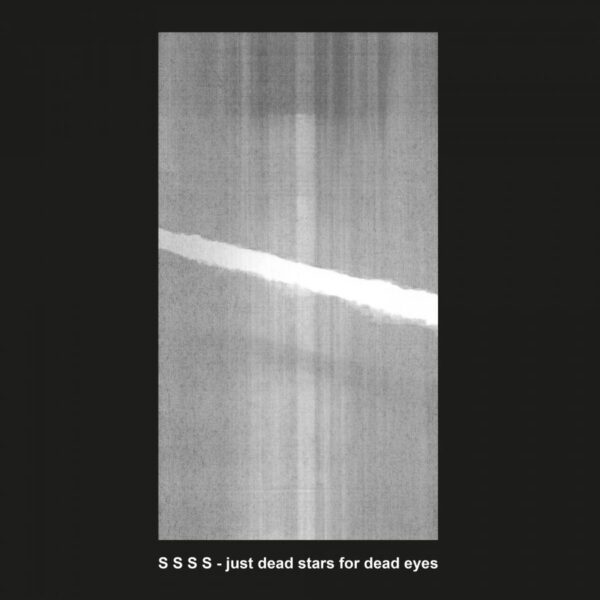 Reasonably effective LP of cold and icy horror-ambient drifty-droney noise from the Swiss youngster Samuel Savenberg, performing here as S S S S. His Just Dead Stars For Dead Eyes (HALLOWGROUND HG1802) came out of a time when he was doing a residency at Sudpol, the Swiss arts centre in Lucerne; I think it was intended as a multi-channel piece, has been performed at Bern and also in London, and certainly manages to carry with it an ambitious sense of scale, depth, and weight.

When realising the piece in Sudpol, Savenberg used what was around him, making field recordings of the atmospheres in the arts centre building, and recorded some pianos as well (though these instruments are scarcely detectable in the heavily-processed noise that emerges from the album). He also met an actor apparently, and asked him to deliver a recit – or perhaps this actor, an unnamed man of mystery, decided to start declaiming anyway, and Samuel just happened to be there with his tape recorder. At any rate, a sad and detached speaking voice can be heard labouring its way through side one, all but intelligible through layers of distortion and murk.

With these strategies, particularly the one about recording local “space” and playing it back in the same “space”, S S S S matches exactly the procedures set out by that Swedish genius C M von Hausswolff, who might be reckoned as a forebear, except he’s far more minimal. Which brings me to another good aspect of Just Dead Stars For Dead Eyes, its sense of drama. Though just 28 minutes in length, this album unfolds gradually into a series of episodes, of strange disconnected events, passing from one compelling mood and vista to the next, while at all times keeping the clouds of gloom and repression above us in the skies. In making these shifts of time and space, Samuel Savenberg does not fear to use harsh noise bursts when needed, even at the expense of breaking the trance-state induced by his ambient drones of grey oceanic qualities, nor does he hesitate to disrupt logic and continuity if his instincts lead him to depress a certain lever or switch on the mixing board. On this basis, I am prepared to give some credence to the press note claim that this record represents a “singular approach to electronic composition”.

Now mastered for vinyl by Lawrence English, the record first came out on the Italian label Haunter Records as a cassette tape in 2015, of which 20 special copies were only made available at the Sudpol arts centre. Haunter Records also released his debut as S S S S, Administration Of Fear, which sounds like a troubling statement of psychological proportions. Even his performing name is intended as a statement about “reduction” or “subtraction” in some way, stripping his real name of its force and reducing it to a series of empty syllables. Not bad…from 29th March 2017.