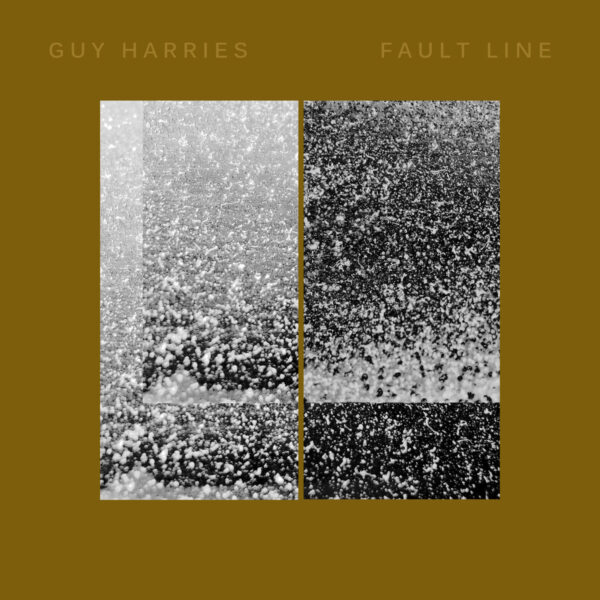 Heard from UK composer Guy Harries in 2016 when he teamed up with Yumi Hara to make the rather solemn and portentous Sonic Rituals LP, which incurred my wrath at the time for careless use of the word “ritual”. However, I’m feeling much more charitably disposed towards his solo record Fault Line (SOMBRE SONIKS SomSon 83) which is before us today, which he assembled using the now commonplace method of layering mixed sources, to wit field recordings, synths, and guitars – to which he adds his trademark woodwinds, and also does some subtle vinyl-turntabling malarkey in the mode of erikm.

The results are well integrated and indeed quite pleasing; the piece ‘Throb’, for instance, leads the listener on a hypnotic trance odyssey through a modern-day underworld, signposted with samples of train-travel announcements. It’s within every man’s reach to do their own personal remake of Pink Floyd’s ‘On The Run’, and it’s something I would encourage. ‘Lava’ is one of those creeping-doom episodes of bass-heavy noise pulsations that Wolf Eyes and Hair Police used to do so well, while ‘Lumens’ could be an experiment with time-stretching and reverb units that would not be out of place in the walls of the EMS Studio in Stockholm. ‘Insomnia’ is a strong piece too, insomnia being a condition which I wish that more composers would try and address in their work, and the eerie echoed klanging-sounds which reverberate throughout this bleak music, growing increasingly nasty and menacing, are immediately recognisable to any who has spent a long dark night troubled by disconnected and threatening thoughts.

If you really want to sink your body to the full fathom five of Harries’ internalised world, though, then the lengthy track ‘A While, An Eternity’ is the one for you – a dark and unsettling take on the swamp-filled early electronic music of Pauline Oliveros, replete with croaking frogs and sinister insects lurking in the mud. What’s more, you can only get this particular piece by buying the limited edition CDR (although it was previously issued on a dark ambient compilation from Terra Relicta). Anyone who samples Max Neuhaus (as he does on ‘Lumens’) is worth a tip of the bonnet, and using field recordings from NYC only adds to the sense of chilling urban menace which permeates the record. Guy Harries has also appeared on Sub Rosa, Sombre Soniks, and Migro; and worked with POW Ensemble and Meira Asher. From 5th May 2017.