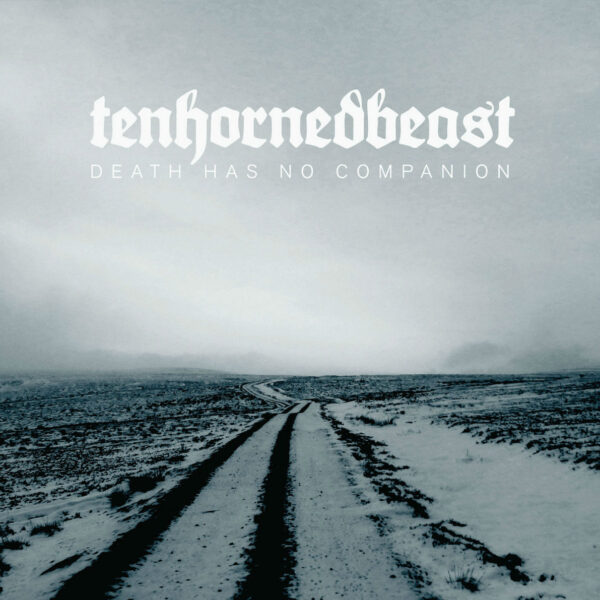 Last heard from TenHornedBeast in 2010 with his Hunts & Wars album for Cold Spring Records…he’s back again this year with Death Has No Companion (CSR227CD) for same label, and what a bleak proposition it is. C Walton has always been a master of chilling ambient tones in the service of extreme themes and subject matter, but at least on Hunts & Wars there was the suggestion that mankind could usefully be doing something, even if it involved unpleasant violence and blood-spilling. Now, he seems resigned to the fact that everything is completely futile, and advocates doing nothing at all.

Three lengthy tracks of desolate windswept gloom will reinforce this miserable view of life, and give you something to contemplate as you walk the long mile by yourself on a pathway to nowhere. Matter of fact, the album even supplies a visual roadmap for such an expedition, as can be seen on the cover art, and the opening track ‘The Wanderer’ gives more than enough clues as to what your next step should be. Unlike some wanderer from classical mythology, such as Diogenes seeking a man, the Wanderer of TenHornedBeast is a forlorn and despairing soul who meanders a lonely stricken world with his shoulders bent under a heavy burden. Then there’s ‘The Lamentation Of Their Women’, a vacant non-tune filled with world-weary sighs in the form of wispy synth blasts which pulsate their plaint across empty plains.

Lastly, ‘In Each Of Us A Secret Sorrow’ seems to contain in title the key to understanding TenHornedBeast’s philosophy of introverted, self-pitying melancholy. For nearly 24 minutes, the creator wills himself into this cold and friendless condition, completely denying the possibility of human contact, compassion, or charity. This strain of “cold ambient” music, and its miserabilist underpinnings, have I think a lengthy history as a sub-sub-genre of Black Metal, and it is evidently informed by the same anti-Christian anti-humanity sentiments; effectively the music is telling us we’re on our own, there is no hope, and no redemption. In short, the message is there is no God.

Press notes for this monumental downer don’t give us much in the way of hard facts about its realisation, although there are allusions to “discordant piano chords” and “shimmering blizzards of feedback”, and the writer likens the music to snow, frozen landscapes, and “bitter winds”. From 30th May 2017.