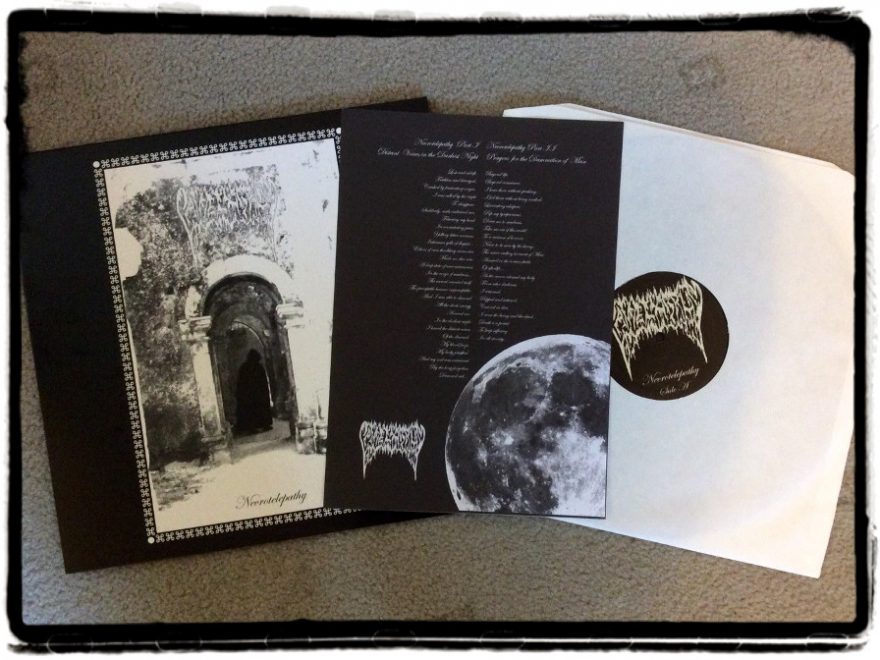 Pardon the pun, but there has been quite a buzz concerning Portugal’s Candelabrum among Black Metal misanthropes since their first full length Necrotelepathy emerged in 2016. The initial tiny edition of 161 LPs sold out quickly as word spread of its extreme nature and harrowing rawness. Reviewed here is the second vinyl pressing, again on Portugal’s Altare label.

As is common with a lot of underground Black Metal, Candelabrum are shrouded in voluntary mystery but may have members in common with another ear shredding Portugese BM act, the mesmerising Black Cilice. Then again, who knows? If your nerves can stand it, Black Cilice’s recent full length, Banished from Time, is well worth tracking down.

This is very much the case with Candelabrum’s Necrotelepathy. The record bursts into deafening life with the side long ‘Distant Voices in the Darkest Night’. It feels like a murky portal has suddenly opened up onto a forbidden ritual, one that is not going well because the darkest denizens of Gehenna have infected the souls of those who are singing and playing the instruments here. The atmosphere is tense and harrowing, repetitive and unvarnished. The sound is weird, out of tune and improvised, knitted together by shimmering and hovering string synth keyboards. Slight relief from the suffocating mood only comes with unexpected shifts of tempo and vicious cymbal crashes. The vocals are distraught shrieks, wails and pained howls.

The terror continues as Candelabrum venture into the second side long racket, ‘Prayers for the Damnation of Man’. The tempo is slow at first then builds to a mangled and pummelling frenzy, the tortured vocalist seemingly oblivious to what is being played around him as he unleashes existential screams to an uncaring audience of ghouls and other lost souls. The record peaks with pounding tom-toms, eerie swirling synth and grinding guitar achieving a kind of collective sonic levitation, but not one of ecstasy or spiritual insight, instead a horrific realisation of eternal suffering and unending derangement.

Infinitely more powerful than much of the juvenile gamut of mainstream Black Metal, Candelabrum are stretching the genre into fearful territories where few have dared ventured before.