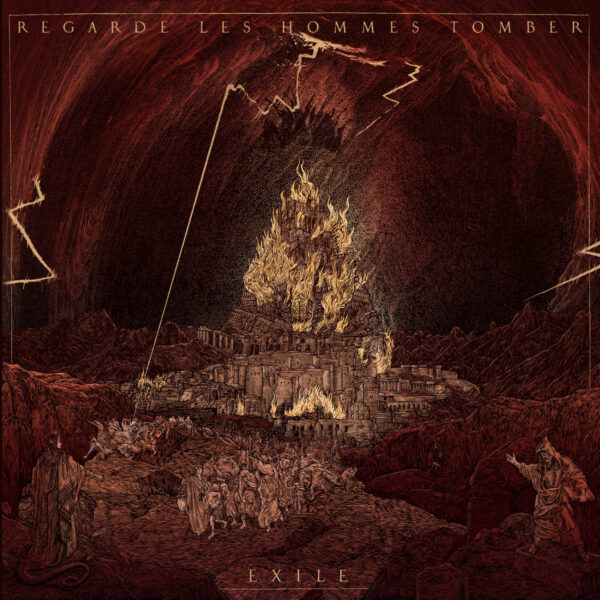 If their first self-titled album was a chronicle of the downfall of humankind and civilisation, then it stands to reason that Regarde Les Hommes Tomber’s follow-up album “Exile” revolves around humanity’s drift into an existential dark-age wilderness. Certainly there are whiffs of an ongoing Biblical theme of a people being cast outside Paradise after committing a great sin, and wandering in darkness to atone for their misdeeds. The one difference though is that instead of being forgiven by their gods, these people become aware of their psychological enslavement to an ideology and throw it off, becoming their own gods and finally taking control of their destiny. The music ranges from black metal – there is more black metal here than on the band’s first album – to sludge doom and post-metal with a dark atmospheric bent.

The album divides into two unequal halves with the first four tracks making up the first 17+ minutes and the remaining three claiming just under 25 minutes of the album’s running time. After a brief instrumental introduction, the album proper begins with “A Sheep Among the Wolves” and sets the tone for the rest of the recording to follow: dense and pitiless with grinding riffs, howling wraith vocals, pummelling percussion and a cold and darkly sparkling ambience that admit no rest for listeners as the music digs deep in its niche and draws listeners far inside. The band’s style is pounding and heavy as one song after another keeps grinding away without pause. There’s hardly much difference between tracks in the way of distinctive riffs which some listeners may be unhappy about. “They came …” goes in a slightly softer if no less oppressive direction with wispy whispering voices and sorrowful droning guitars for a brief time before collapsing into its longer companion piece “… To Take Us”, a monster funereal sludge piece where icy voices and Arctic frigidity combine with steaming tremolo guitar riffs and thundering drums to produce a hellish epic. The sound and atmosphere of the song – sharp, overwhelming, paranoid in parts – are the best part of it.

The band continues its path into monumental blackened sludge post-metal bombast with occasional clear-toned guitar melancholy in the last two songs which can be tiring and monotonous in parts, especially in the very last and very long outro “The Incandescent March” which features some lengthy instrumental passages of slow and heavy dirge-like music. At this point, while there are still lyrics and singing, these become secondary to the musical spectacle. While the music can be very intense, it also sounds a bit top heavy without much bass substance, and this might explain in part why both songs fail to reach definite climaxes. There’s also a lot of flailing and meandering in the outro track which wastes its energy instead of focusing it towards a peak.

Certainly RLHT invest a lot of effort and thought in the album’s concept and developing their sound into a monumental beast of blackened sludge – so it’s a pity the music itself doesn’t quite match the ambition set for it. All tracks need to be more distinct from one another with clear motifs and the long tracks especially need to sound more focused instead of seeming to wander all over the joint just banging and bludgeoning away. “Exile” is a fair enough work, not really outstanding, and I’m sure the band will do much better on a follow-up album.