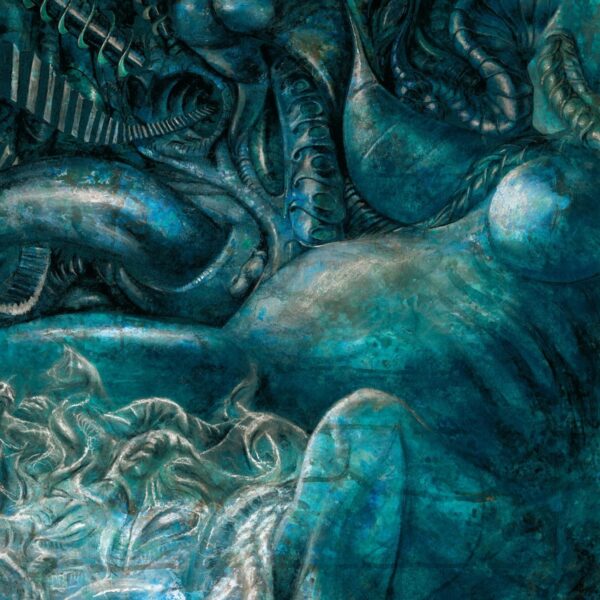 If you happen to be new to the joys of Oranssi Pazuzu and you’re wondering if you’re too late for this particular party of fusion retro-psychedelic / grim raw BM music, there’s no need to fear as this recent EP is actually a repackaging of OP’s part of a split album the band released together with Candy Cane back in 2010. From this point you can either delve right back into the band’s earliest releases when the songs were more … well, more song-like with lyrics and definite riffs, or into the more recent work which features trance-like and very much darker music. Or you can stay with OP as they were back in 2010, poised on the edge of going one way or another, including going off an abyss and into complete derangement.

From the time the EP starts, you’re in a completely different world, regardless of where you originally came from: a world of washed-out or bleached atmospheres, sometimes sickly moods and in later parts of the EP an air of constant menace as though you’re being stalked by a shadow predator that you have no hope of escape from. The music appears more dense and layered than it might actually be, thanks to its production which makes it very blurry and resonating with deep echo. The grim scratchy vocals come across more clearly than you’d expect and add an extra malevolent element to music already sinister in its off-key rhythms and beats, and nauseous, abrasive sounds.

The songs on the EP are hellishly good and very dense, whether because of that crazed high-pitched siren drone on “Ole muukalainen” or those maddening repeating riffs along with the sickly synth tones and an encroaching darkness on the track following. But the one track that stands out is “Torni” which appears more laidback and slower than the others yet more sinister – it slinks along with a sleepy gargle vocal, crashing guitar and church organ and the odd spiral effect that stumbles in from another galaxy existing in parallel with ours. The last track doesn’t add much that we haven’t heard already except maybe more bludgeoning slabs of texture, tone and synth wash than needed, resulting in a brutal song that can be boring in parts, especially near the end.

At just under 27 minutes it’s not long but “Farmakologinen” has an epic feel and plunges you so totally in the Oranssi Pazuzu universe that it really does feel like an album. Album or not, this recording is a good introduction to the band and will serve to remind fans of how and why they got hooked on OP originally.