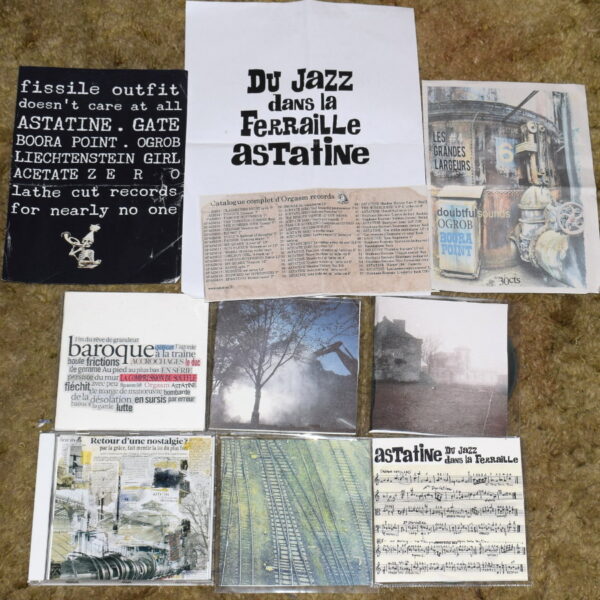 Happy to hear from Astatine, a Parisian sound-art and music genius who may be Stéphane Recrosio and who has collaborated with Ogrob on a ten-incher of unusual proportions which we noted here. Astatine sent a large bundle of CDRs representing some of his work, many of them released on his own micro-label Orgasm Records, which we will list briefly even if they are not all “current” or new releases strictly speaking. Package arrived, with some flyers, on 22 May 2017. 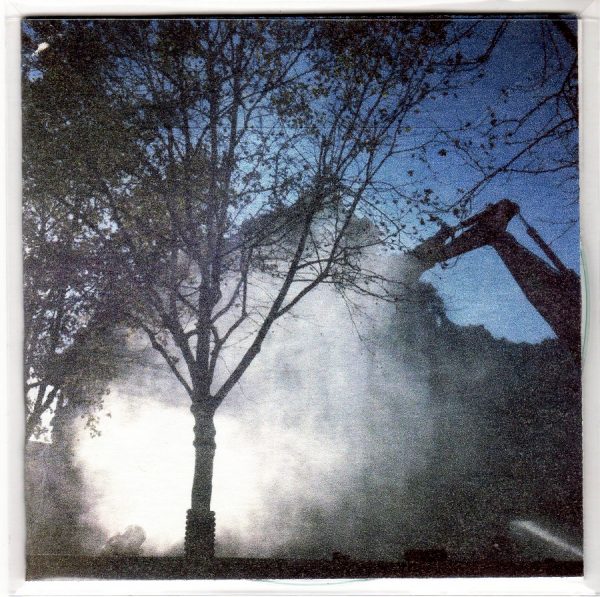 First spun was Les Lambrissures Crevees (SPASM56). Strange songs delivered with a half-hearted recit and strumming acoustic guitar are sliced and shot through with layers of noise, electronic interventions, field recordings, overlapping voices, and general debris. A delicious lo-fi delirium results, over-crowded with a rich excess of sonic information, very little of which matches up. I just love it. And with song titles like ‘For Getz Sake’ and ‘Releve Champ Frequence’, you can’t miss. Surrealism in a collage scrapbook of disarray. As it turns out, this record is pretty typical of what Astatine does. 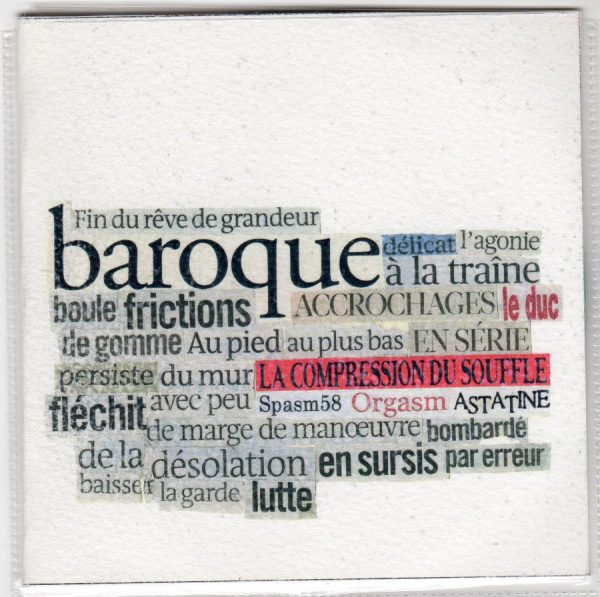 More of the same on La Compression Du Souffle (SPASM58), another 16 short tracks with distorted songs fighting their way through lumps of murk and mud. Sometimes here the electric guitars are doubled up (I think) and there’s even a bass following the simple melodies and lost style of singing; all highly reminiscent of Sebadoh, only even more obscure. To use his own words: “I wanted to be eric’s trip playing the first songs by HOOd or the inverse, can’t remember and now I don’t know. Doesn’t matter.” This very limited LP (most of the output existed briefly as lathe cuts, and limited press CDRs) also boasts some wonderfully bewildering episodes which are clearly not songs, but amount to glimpses of a strange internalised world, sketched in lo-fi noise. Another gem. The Dada-styled lettering (probably composed from newspaper headlines, like Sex Pistols covers) is one of Astatine’s visual trademarks, if the previous ten-inch is a precedent. 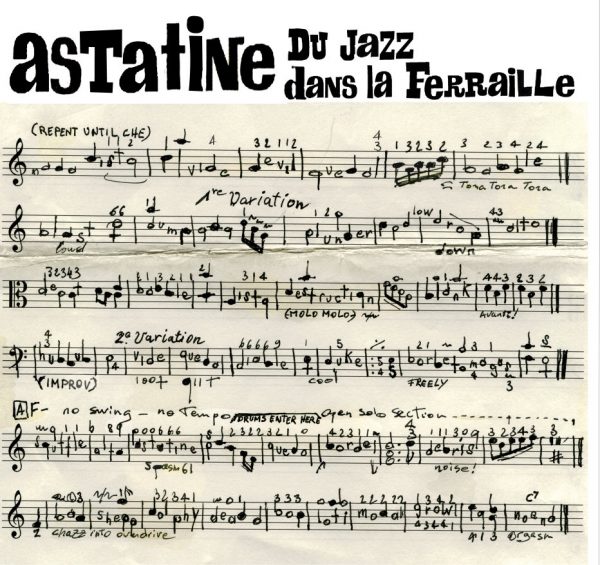 On Du Jazz Dans La Ferraille (SPASM61), another sixteen tracks (maybe 16 is his lucky number), we’ve got no songs as such but a number of turgid instrumental pieces which are characterised by a thumping, lumbering rhythm – perhaps the creator’s primitive interpretation of what “jazz” drumming is supposed to be. Piano, string bass emanations, and other nauseating sounds worm their way into each piece in an incredibly glorpy, sluggish, manner. I adore the absurdist, playful atmosphere of this creeper. Guest player Lobox is credited with “drum interludes” and Stephane provides sleeve notes in French, referring to Max Roach and Charles Mingus, whose music I love, but must concede that neither of them would have dared to make a record as occluded and opaque as this beaut. 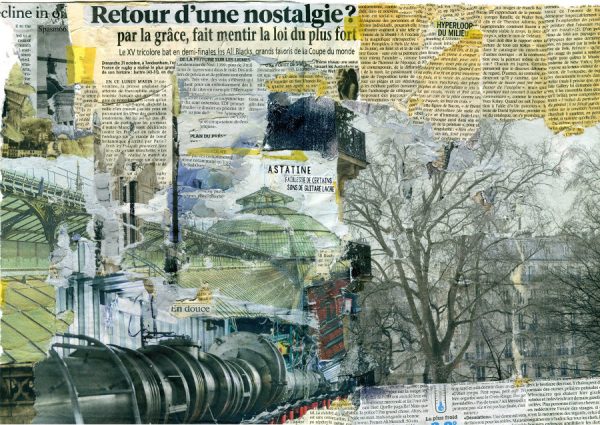 Faiblesse De Certains Sons De Guitare Lache does exist as (SPASM66), but before me I have a copy of a limited CDR on the French Label [A…Autoprod]. This particular album once again invites comparisons with Sebadoh, and this time the songs (the first two tracks, at any rate) have more in the way of an identifiable melody and it might even be possible to make out some of the lyrics, even though Astatine continues to mumble and murmur as if his mouth were full of dough. The guitars are also heavier and a tad closer to an actual “indie rock” sound, which may be due to the various guest players who appear on the album. This one might almost the best place for a beginner to start with the world of this naive outsider genius, but be warned there are still a fair number of bewildering sound experiments on the record, identified with surreal and poetic titles such as ‘Refuser Les Instruments Legues Par L’Industrie’ and the gorgeously de-natured ‘Alkaline Fragments’. Astatine has a real knack for “distressing” his sound in a gloriously aesthetic way, the like of which we haven’t heard since the glory days of Ashtray Navigations. 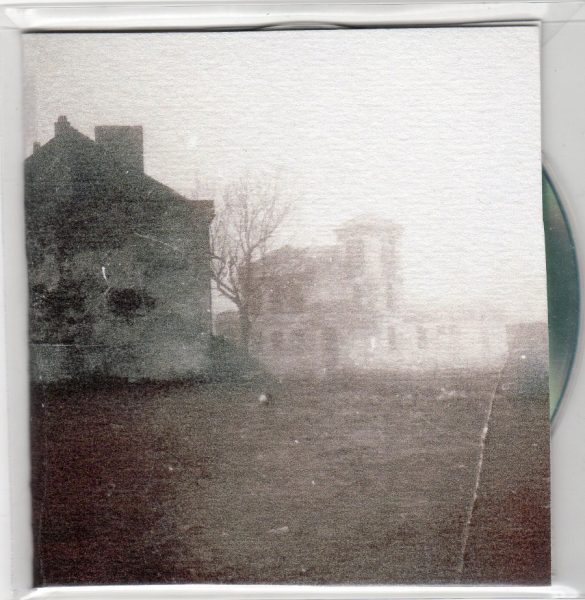 19 cuts on Chamber Fracture (SPASM51), which emerged in 2014 on a limited LP run (20 copies). More introverted loner-indie songs recorded in a bedroom in the self-overdub PortaStudio way. One thing to savour is the way that the layered tracks don’t quite match up, but it works perfectly anyway. As usual, Astatine gives us two songs to sweeten the deal, then dives straight into the perplexing noise cuts. Not quite as over-loaded as the later Les Lambrissures Crevees, which I prefer; Chamber Fracture has its moments of high weirdness, but the songs and stoned-out guitar riffs are starting to feel a bit samey. Superb cover image of foggy desolation is credited to Remigijus Treigys. 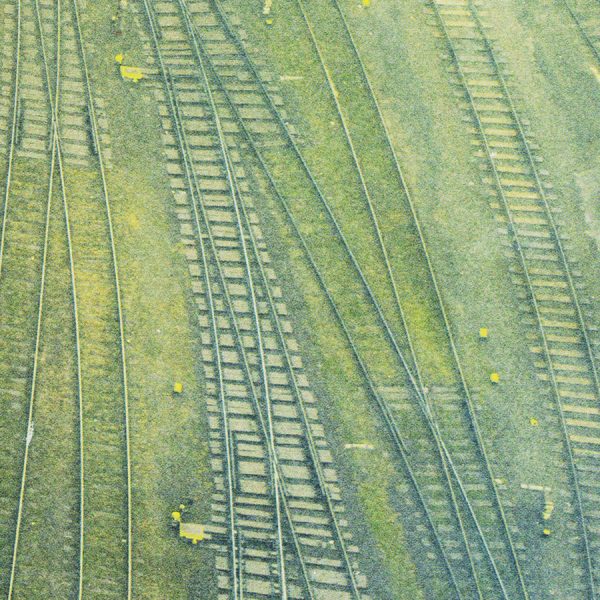 Attempts, Debris and Left Behind (FISSILE 6) exists as 20 CDRs on the Fissile label (just three copies remain for sale at time of writing). This is a set of 22 demos and out-takes, which presumes that somehow they were deemed unsuitable for inclusion on any given finished item. This may indicate that Astatine likes to set the bar high. On the other hand, the quality isn’t much different to what we’ve heard so far in this batch, although arguably some of the meandering sound-odysseys such as ‘Cable’ and ‘Siren Seven One’ are somewhat more primitive and unfinished, and generally uncertain in tone and delivery. Given that Astatine evidently makes a virtue of such qualities, that’s really saying something. I can’t think of any serious fan that would be disappointed with these left-behinds. On these very personal statements, Astatine has raised “undesirable” elements in recording to a high aesthetic benchmark all of his own – the accident, the mistake, the process-glitch are all grist to his millstones. If you’re as sated as I am of hearing “flawless” digital records with their clean surfaces, you know what to do. Highly recommended!