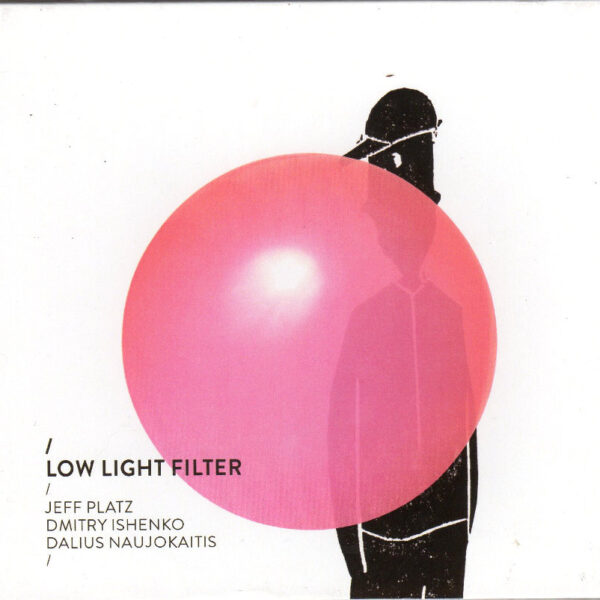 Package of contemporary US jazz from Rhode Island, personally sent by Jeff Platz the guitarist, and arrived here 1st June 2017. Extensive musician bios included in the envelope confirm the prowess and ability of all players involved, with long lists of live sets, collaborations, and gigging with some major free players.

Low Light Filter (GLITCH RECORDS 005) is performed by the Platz Trio Project, where guitarist Platz is supported by the NYC bass player Dmitry Ishenko and the Lithuanian drummer Dalius Naujokaitis. Seven very “smokey” instrumentals result, almost as if the band were striving to evoke a dingy nightclub in an underground basement cafe at some undetermined point between 1950 and 1965. The trio’s sound appears quite understated at first, and superficially not that far away from a Kenny Burrell LP or a Jim Hall – Bill Evans duo. Listen closer though and the trio’s gift for invention and improvisation becomes clearer, and while they don’t abandon rhythm and structure, there are no conventional post-Bebop “heads” to these tunes. Not especially “out”, but that’s a good thing in this instance. While some current Norwegian born-again free jazzers seem to be engaged in an arms race towards destruction by excessive blowing and angry noise, Platz Trio Project are refreshingly calm and centred in their approach to jazz; their quieter approach allows Platz to exhibit some delicate nuances of shade, tone, and odd sounds. Not as insouciant as the “bubble-gum” cover art suggests. The Neu Cabal record (GLITCH RECORDS 006) sees the same trio performing on a 2016 Brooklyn session, with the addition of Daniel Carter on woodwinds, trumpet, and piano. Carter is a major player who’s performed with Matthew Shipp, Sabir Mateen, William Parker, Billy Bang, and Sun Ra; in addition to his lengthy catalogue on “proper” jazz labels, Carter evidently made a hit with the American underground weirdsters of the 1990s and 2000s, appearing on labels such as Ecstatic Peace! and Sound@One. As Neu Cabal, the quartet turn in an excellent set of mournful and elegiac jazz, understated and contemplative but not quite as low-profile as the above album. The players, especially Carter, don’t stint when it comes to exploring painful and difficult emotional states, and each of these ten tracks amounts to a confessional, a baring of the soul. In response to Carter’s keening notes rich in sweet poignancy, Jeff Platz digs inside himself to produce some of the oddest sounds to escape from an electric jazz guitar – clipped notes, barks, squeals and bird-like yawps. The quartet hang together beautifully, no one instrument fully dominating the music, and the sparse playing allows plenty of exciting gaps and lets us hear everything with a stark clarity. Comes close to some of the more eerie moments on Sun Ra Arkestra records from the mid-1960s, such as his ESP-Disk albums. Again, the cover art – a secret agent with an eye patch, pistol, and hot pink dress – seems at odds with the haunting content. On Modular Systems (SETOLA DI MAIALE SM3150), Platiz and Ishenko are joined by saxophonist Blaise Siwula and drummer Dave Miller. Siwula is originally from Detroit but like most of the players on these discs has been drawn to the NYC nexus. He has a much more upbeat style than Carter and is evidently able to deliver fluid, fast runs of great invention. Platz’s guitar work is once again loaded with surprise effects and novelties. Yet the combination of these two players doesn’t quite work for me, and the album isn’t quite landing on today’s spin. Sax and guitar seem to be more at odds with each other, overlaid from two different albums almost, instead of the sympathetic cadences of Neu Cabal. Siwula has got the chops and the staying power, but I’m not feeling the energy – even when he’s given space to reach for the stars, as on ‘Astronomy Etcetera’, his rockets aren’t firing. For the most part, I feel he’s playing too many notes, and not really paying enough attention to the rest of the band. Even so, the quartet make a pleasing combination of sounds and effects on this 2015 session.