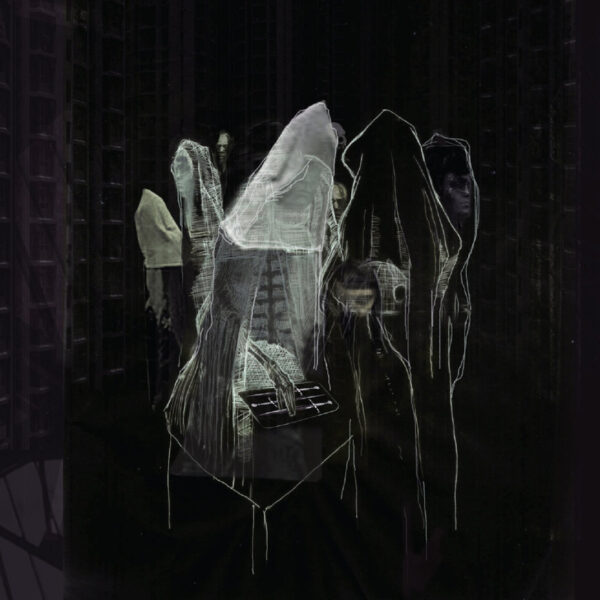 Grisly intense doom from Khost on their Governance (COLD SPRING RECORDS CSR237CD) album…this Birmingham duo have been active since 2014 and have already released a fair number of albums for the Cold Spring label, including Corrosive Shroud and Copper Lock Hell; they seem to thrive on concocting these tri-partite titles that suggest inescapable stories of horror, such as Amoral Apathy Suppression and Hypocrisy Banality Possession, both albums which you could download from their Bandcamp presence BTW. From these titles alone, I get the sense of vindictiveness, of grudge-holding on a psychotic scale – an inbuilt resentment against society and authority figures that probably started in kindergarten and carried on through school and the workplace.

They’ve also formed a connection with fellow Brummies Godflesh, information which might help you situate their aggressive, punchy music. Andy Swan and Damian Bennett are the two responsible for the ghastly, crushing mass that is Governance, a real endurance test of a record filled with suffocating tones, pounding martial beats, and groaning voices, everything delivered at more or less the same “crawling” leaden pace, creating insufferable images of nightmarish proportions. The listener is pounded into a degraded state by the futility and dead weight of everything by this hellish noise; you’ll soon be on your knees and pleading for mercy. Apparently Khost are drawing on traumatic personal experiences to create these monstrosities; the press notes speak with some relish of “times of unease and sickness” and “one near-death experience”.

Well, I like the way Khost refuse to play in a familiar “doom metal” style, by which I mean they don’t really do structured songs or capitulate to standard rock music moves if they can avoid it, and much of Governance emerges as an extreme form of abstract art-music that’s intensely cold and violent while making futile swipes at the demons that are out to possess us at every turn. It’s not too fanciful to suggest Khost not only take these hungry demons as a given, they actually delight in pointing them out to us, doing so intermittently with flashlights and candles to illuminate flitting winged forms everywhere in the night. At the same time, I found this bloodthirsty album a bit samey and claustrophobic; the team are clearly capable of experimenting with dynamics, and I wish they’d do it more often, but instead they can’t wait to put their foot on the excesso-pedal and clog up each track with over-wrought shouting, pounding percussion, and messy indistinct noise by the pound. Still, them that enjoy the sensation of having their body slowly hammered into the ground with sledgehammers like a human tent peg will be in for a good time. From 6th June 2017.