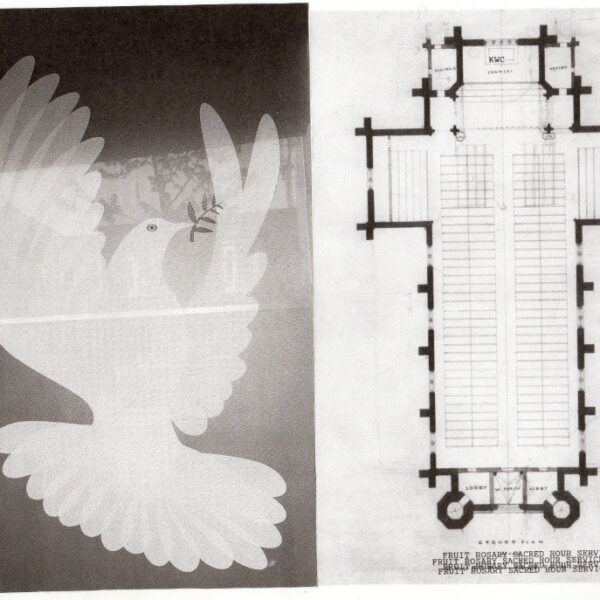 Another fascinating item from Kevin W. Cahill and his Power Moves Library label. Appearing here simply as KWC, his Fruit Rosary Sacred Hour Service (PML CDR 05) is two long tracks of stitched together and processed materials, whose original sources are largely concealed from us, both by the electro-acoustic transformations and by KWC’s extremely elliptical sleeve notes. Hardly any information in the envelope I was sent, apart from an architectural drawing likely to be the floor plan of a church, and an image of a dove of peace that looks like it might have flown from the décor of any given 20th-century Christian religious establishment.

Since the titles refer to “Prayer” and “Performance”, I’m guessing that some of these recordings may have begun life as a choir or a church service, but he subjects the sounds to much distortion and treatment until any human element is pretty much bled away. What we’re left with is a fascinating and compelling noise that stands on the verge of being recognisable, yet remains constantly elusive and just out of reach. A beautiful droney music emerges from the broken fragments. Tersely describing his methods, KWC speaks of different kinds of cassette recorders, found sounds, a lap steel guitar, and assorted digital post-processing actions.

I like the episodic nature of the work; each long track comprises at least three or four separate sequences, effortlessly elided together to create a mysterious yet coherent statement (clearly something to do with religion, prayer, and devotion, albeit in a very allusive way; track one even ends with a spoken-word sermon, delivered by a rather alarming clipped voice). I also like the commitment to the process in each instance; KWC will keep diligently exploring the sonic situation he has created until he’s milked it of everything he can, exploring all of its avenues and byways. “Turned out surprisingly decent,” is his own assessment of this little gem, “and [the rough sounds] fit this project as flea market/church bazaar mystery grips.” From 7th June 2017.