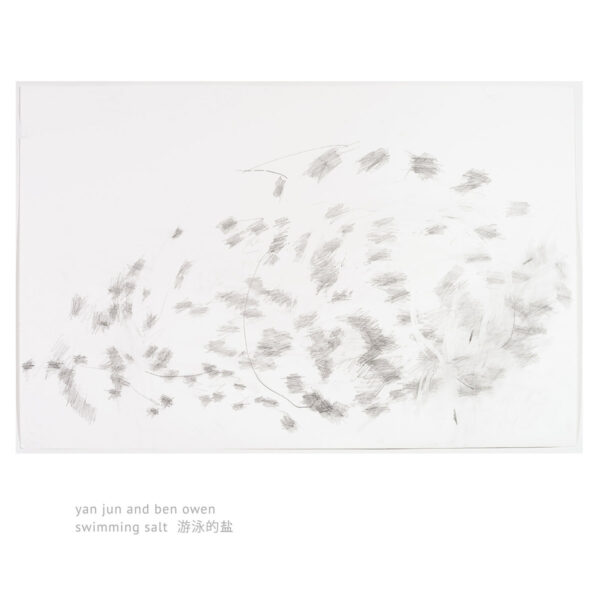 Nice to hear from the American sound artist Ben Owen, owner of the New York label winds measure recordings which has over the years issued some extremely testing and difficult examples of hard-to-hear minimal sound art and process noise. He’s here today with Yan Jun, the Beijing musician / poet who also has a record label (Sub Jam) and is involved in improvisation and experimental music. The record Swimming Salt (ORGANIZED MUSIC FROM THESSALONIKI t34) is a single 38-minute piece created with just electronics, amplification, feedback and radio signals, and they did it in Brooklyn in 2014.

I feel I should explore more of Yan Jun’s work, as he has shown up on the radar a few times in the past – most notably as contributor to the Sub Rosa box set An Anthology of Chinese Experimental Music 1992-2008, and other instances where his status as critic and writer mark him out as an all-round good guy and influential big-shot in the Chinese alternative music spheres. Though credited here only with “feedback”, I’m intrigued to learn of his methods which embody field recordings, the human voice, body movements, and the entire environment. I’d like to think he takes a very holistic approach. Maybe he’s one who can enter any given sound-generating situation and influence it just by taking two paces to the left. Some blessed souls there be who emanate life-giving vibrations from their torso, bringing benefits to the world.

The duo intend Swimming Salt to be experienced as a very rich array of sounds, tones, and textures. Not for them the severe delights of “reductionism”, as it’s identified here in the press notes; they want to engage us, make real contact with the human ear (and mind, and body, and heart) and keep us transfixed through sound. There is a lot of detail here, so they claim, simply awaiting the right attentive listener to decode and process it. The players believe strongly in the possibility of creating, and altering, an atmosphere through sound, maintaining its intensity and varying it carefully through the duration of its existence.

Ben Owen also did the abstract drawing for the cover art, a minimal pencil piece whose gestural marks may be analogous to the small gestures used in the creation of the record; the patterns formed by these grey smears and frottage marks could be read as indicators of a magnetic field, telling us something about the atmospheric nature of Swimming Salt, attempting to delineate it like a map. From June 2017.