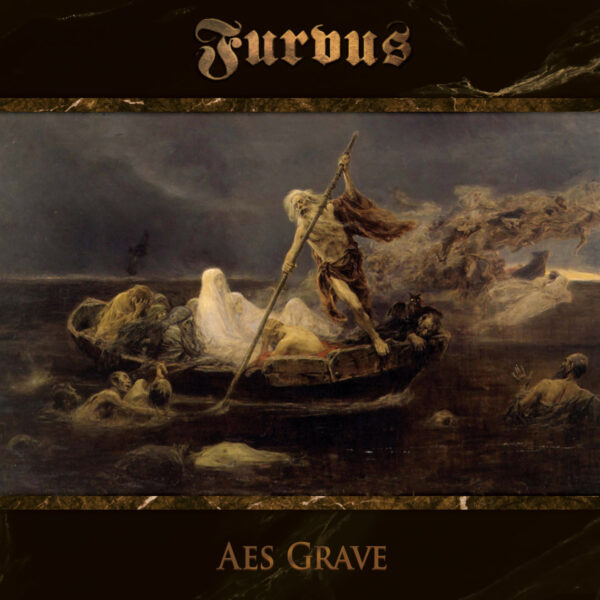 Furvus is the long-standing project of Luigi Maria Mennella, who I never heard of before but a player who’s been active since the 1980s and clearly has built up a cult following. Besides Furvus, he also performs in the Italian Black Metal / Dark Folk combo Ater, and solo as En Velours Noir – a name which should clue you in to his taste for dark themes with a strong Gothic, Romantic element. Already I fully expect him to inhabit a castle in the forest of Massimina, parading at night dressed either in black armour or in a heavy velvet cape, or both. And he must own an ape.

Aes Grave (DARK VINYL DV73) is his second outing as Furvus, a follow-up to 1999’s Deflorescens Iam Robur (there was a collector’s edition of this album packed with dried leaves inside the jewel case), and it’s a pretty intense collection of overwrought songs and sounds, delivered with hefty doses of bombast, mysticism, and sentimentality. Mennella plays and sings everything and exhibits a high degree of craft in the studio as he constructs each layered, over-loaded track. He makes plain his fondness for the esoteric and the strange – the track titles alone are near-incomprehensible mixtures of Latin, Italian, Gaelic and French words, often in a single sentence, and the grisly cover painting contains enough visual ideas for an entire series of Gothic novels. The music of Furvus occupies a niche somewhere in the dark-neo-folk genre strata, a zone with which I’m not too familiar, but also carries influences from classical music – he plays like an orchestra and sings like a choir, and may be developing his own deliciously corrupted version of 19th century Romanticism. That’s my guess, based on the “Neoclassic” tag which seems to accrue to his work online and in print.

Additionally, Aes Grave seems to have ambitions to tell a story or aspire to the condition of a novel (hopefully at least 1000 pages long, full of murderous conspiracies and doomed star-crossed lovers, and bound in jet-black buckram), as reflected in the narrative cues and hints: sound effects, “cinematic” sweeps, and the sense of epic grandeur and fading beauty infused deeply into every second of the music. I wish I could find more to enjoy in this intelligent and well-made record, but I find it gloomy in the extreme – Mennella’s singing voice goes beyond what is normally expected of a melancholic dark-folk singer and into some bizarre realm only he can occupy. Plus there’s the portentous and heavy tone to the whole album, every tune delivered at a leaden pace with minor key settings and martial percussion to hammer home the sense of inescapable futility. An acquired taste, but there’s no shortage of content and moment in this richly-patterned heavy tapestry, and you may wish to investigate. From 12th June 2017.