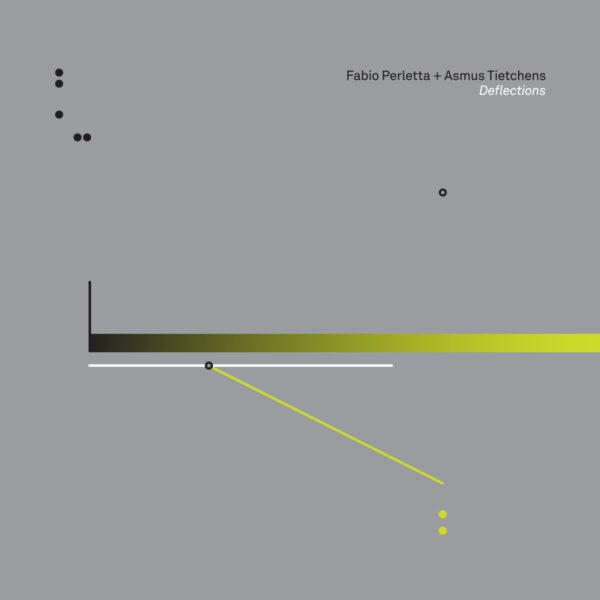 Severe digital minimalism now from the team of Fabio Perletta and Asmus Tietchens on Deflections (AUF ABWEGEN aatp59), six tracks of electronic purity packaged in an austere, diagrammatic package. Printed inside this anonymous cover are two external quotations, one from the classical poet Lucretius and another from the 20th-century Romanian philosopher E.M. Cioran. The Lucretius excerpt comes from his only surviving work, On The Nature Of Things, and it speculates about the nature of atoms moving through a void. These citations are presumably intended to set the work in context, though they are rather oblique.

Reading Perletta’s own explanations of his work online, I’m not much wiser; phrases like “elementary sonic emissions and drifting nano-structures” don’t really help. Perletta is a serious Italian composer though, and seems to be preoccupied with investigating the nature of reality in some way. He does it through using microscopic, minimal sounds, and building sound installations. He speculates about things in nature which are visible and invisible. Deflections may be part of this grand scheme; I have this idea that somehow he’s sending wayward atoms of sound adrift in a test chamber, or sonic laboratory, and letting them drift where they may, bumping about the enclosed room until they run out of steam and stop doing whatever it is they’re doing. This is wholly nonsensical thinking on my part, but right now it’s the only way I can make sense of the phrase “[the] hermetic micro-cosmos of Deflections unfolds by exploring instability and physical decay of sound”.

Extreme minimalism and small sounds are also associated with Asmus Tietchens, so it’s not surprising to see his name assigned to this project. I’ll admit I can’t really tell what his contribution is to Deflections, and I wonder if the two of them even met up for this collaboration, as the sleeve indicates they recorded and processed their respective parts in Italy and Hamburg. I’ll hazard a guess that this is mostly Perletta’s thing and that he assembled the release, using contributions from Asmus, in line with his own conceptual framework. This is the latest in a long line of team-ups which this Italian has instigated, a list that includes names such as Giuseppe Ielasi, Mark Fell, and William Basinksi.

I found Deflections an arid and joyless work. I’m prepared to believe there’s some remarkable scientific or philosophical information encoded into these cold digital emanations, but Perletta does not make it intelligible, nor is there any passion exhibited for the subject that might awaken one’s intellectual curiosity. Provisionally, I’ll file this one alongside Florian Hecker’s Speculative Solution on the shelf marked “too deep for me”. From 12th June 2017.