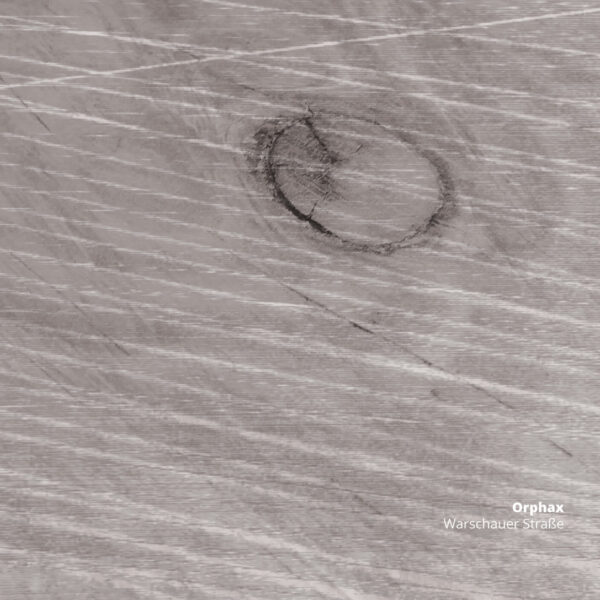 Orphax is Sietse van Erve, a Dutch player who we last heard with his 2013 album De Tragedie van een Liedjesschrijver Zonder Woorden. Writer Jack Tatty found a lot of variety in the six drones on that release, but today’s record is much more single-minded. Warschauer Strasse (OPA LOKA RECORDS OL 1703) contains just two lengthy pieces, which refuse to vary very much as they unspool before us with a relentless sense of purpose. Right away the listener is obliged to listen harder and try and identify the minute shifts in texture and tone that Orphax may be layering into these ambitious compositions.

The work has its origins in van Erve’s visits to Berlin. He found it to be a city of great contrasts. While he has many happy, and quite personal, memories of his sojourns, there is also a kind of “roughness” to Berlin which he couldn’t ignore. On one level, Warschauer Strasse represents his attempts to resolve this tension, allowing moments of distress and noise to cause ripples in the calm surfaces of his soft drones. If you listen with some knowledge of his plan, the two pieces here start to make some musical sense; the actions of disturbance he’s alluding to are not simply isolated events in the musical flow, however. Rather, it’s a process that seems to be happening continually. To put it another way, for over 20 minutes he walks a tightrope and attempts to square a circle, reconciling conflicting memories and emotional states within a vaguely-shifting drone. There’s a stasis to the music here which I like; it’s giving us a chance to concentrate on something.

It’s a tricky area when we start to discuss fleeting and intangible things like “memory”, and even more so when an artist alludes to matters of great personal significance. Most of us find the best we can hope for from a trip abroad is to send a postcard home with a cheap sentiment scrawled on it. 1 But the power of art ought to be that it can make these experiences more universal, and deeper; that is sublimation. On this occasion, judge for yourself how close Orphax comes to success. From 12th June 2017.