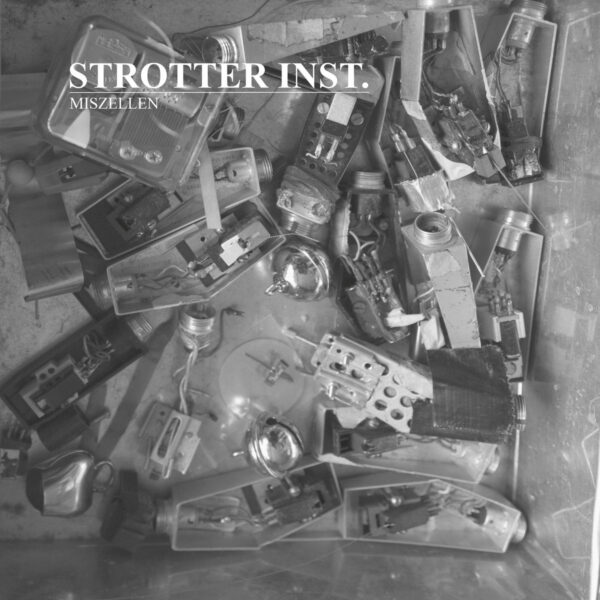 Seems like we haven’t heard from Strotter Inst. since 2009, with the very fine Minenhund record he released for Public Guilt and Hinterzimmer. Christoph Hess is the Swiss creator behind this very artistic turntabling act, which involves a very radical approach to the use of rotating plattens and cartridges. He’s more concerned with the mechanical process involved in his machines than he is with sound-generation, and it would be a mistake to classify him as a DJ by any stretch of the imagination. What ends up on any given finished product from the Strotster is more like industrial noise, but tempered with much more nuanced ideas about light and shade than your average metal and chains clankster type. Hess is particularly good with loops and patterns, and is capable of unleashing some ingenious and innovative ideas within this “genre”.

What a joy to hear him at work on Miszellen (HALLOWGROUND HG1707), an entire double LP of recent experiments and forays. The title translates as “miscellany” in English, and each piece is identified as a miscellany, associated at the same time with a particular big name from the world of art noise, industrial music, drone and similar styles – so scan the covers for the monickers of Asmus Tietchens, Nurse With Wound, Beequeen, P16.D4, RLW, Foetus, and other popular teen idols from the hit parade. At one level then this is Strotter Inst. doing the “remix” thing, but one listen will instantly clue you in that Hess is attempting something far more daring than simply rearranging the component elements of a “track”. Instead he only uses as little or as much of the original source as he needs; the rest comes directly from his own imagination, his personal vision of what the music could be. A repurposing, perhaps; we might end up with an entirely new model of Tietchens and all the rest. Given the lengthy discographies of all involved, and the depth to which they have established themselves in our culture, such a repurposing is no mean feat. It’s on a par with remaking a public monument or famous civic building, such as a life-size Eiffel Tower made from breadsticks.

It’s exciting to read that this music is intended to subvert our normal listening experience in some manner; “the turntable can read these fragments in a non-linear way” according to the press notes, attempting to indicate something of the subtractive process that has been used here. Yet we also learn that he is working with music and artists that he loves and respects, and this is not a destructive exercise. It’s more appropriate to read all the pieces on Miszellen as meta-musics, transfigured versions of existing forms; we are invited to see them as “the latest news of research in a scientific magazine”. This suggests something about the development of possibilities within musical culture that is encouraging; it’s not just a question of being a passive consumer, but an active participant in an ongoing process of change and growth. From 29th March 2017.