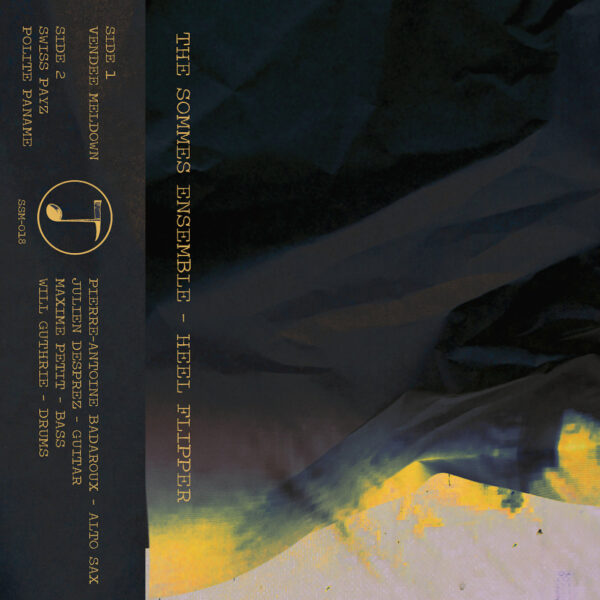 Quite nice Canadian free jazz-improv-noise by The Sommes Ensemble on their cassette Heel Flipper (SMALL SCALE MUSIC SSM-018). The team of Pierre-Antoine Badaroux (alto), Julien Desprez (guitar), Maxime Petit (bass) and Will Guthrie (drums) seem to aim for a group sound that’s not too far away from post-punk New Wave music of the late 1970s, while still reserving the right to blow free-form flights of energy long into the night. Indeed the whole of Side A is occupied by a single piece ‘Vendee Meltdown’ on which they never run out of gasoline for the whole nine yards, and keep audibly bouncing about the stage as though they were set on top of a hot-plate in bare feet. Particularly nice is the slightly chaotic edge and blocky outputs supplied by Desprez’s electric guitar, which can be both discordant in melody and surly in tone, not concerned with crowd-pleasing sweeteners. This long piece takes a breather about midway and starts extending into long tones, blasts, and heavy sighs, yet while arguably slower in pace is still laced with a lot of power. Two other examples of their craft, ‘Swiss Payz’ and ‘Polite Paname’ occupy the flip, and it’s by now one notices the bassist and drummer getting their licks in with a single-minded commitment to simplistic, repetitious riffage, which I find very enjoyable. The soloists can’t help joining in, and when they do it’s more like some teenagers in a punk-thrash garage combo rehearsing, than “art” music; as such we like it fine. “Strategic, organized chaos” is their own way of describing this spiky, insistent stuff. From 21st June 2017.