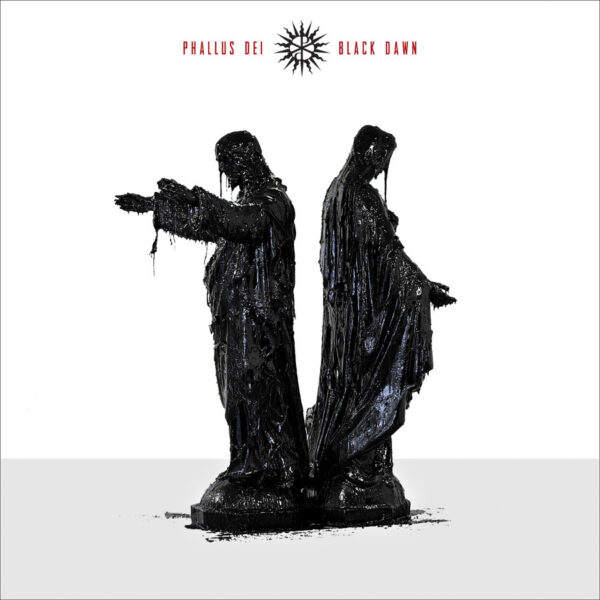 The German combo Phallus Dei have been active since the late 1980s and already have a formidable discography, including a string of releases on the Paragoric label…it might be fair to characterise them as post-Industrial music, since the band’s main protagonist Oliver Strahl Lingam was confident that he could make a record that was as good as anything being released in the name of “industrial” music at that time. Now after nearly two decades this trio occupy their own niche in this genre and draw awe-stricken comments from fans and press alike. The Dutch drummer in this band, Richard van Kruysdijk, has crossed our palm before with his heavy-duty album Lumbar Fist; he also did the mixing and mastering for this release, giving ample evidence of his seasoned skills in the studio and behind the desks. Today before us we have the double-LP / CD release Black Dawn (DARK VINYL RECORDS DV70), a grim and heavy downer of lurching goth-industrial electronic noise and pounding percussion, executed with the sort of remorseless precision and attention to detail that I expect only comes to those who have been honing their craft for as long as Phallus Dei. They’ve become experts, to put it more concisely, like torturers working in the Tower of London. This oppressive and terrifying racket is executed with synths, tapes, guitars, vocals, drums, and probably lots more besides…the record is polished and layered without being cluttered, and the band shrink not from committing any excess of duration or volume, evidently able to keep up the steady churn of head-battering music for as long as is necessary. One look at their publicity photos was enough to scare me off; shaven heads, muscular arms, black t-shirts…even security personnel at nightclubs are intimidated.

Black Dawn features four guest players, who bring their personalities and rich histories to the album along with their instrumental textures. The main stand-out for me is Peter Brötzmann, the famed German improvising saxman, who lends his puffing heft to the ‘Starman’ track. We needn’t be massively surprised by this, given Peter B’s contributions to records by Caspar Brötzmann Massaker (his son’s band) in the 1990s, themselves exemplary emissions in the brutal post-rock hammering shrill noise department, but it’s still encouraging; I doubt if Derek Bailey would ever have leant his guitar playing to a record produced by Kevin Martin, for instance. Brötzmann turns in a pretty florid performance here, bordering on cabaret-styled industrial squealing sax; but it suits the ennervating, paranoid mood of this urgent and heavy track. Jacqueline Hamelink’s cello, sawing and bowing as if the fate of the world depended on her actions, also does much to contribute to the alarming mood here. She’s the second guest player who also plays cello on ‘Zauberwald’, the track which succeeds best for me; it’s got all the drama of Led Zeppelin’s ‘Kashmir’ (which it does resemble superficially), locked into an intense 12-minute monster of looping, repetition, and constricted movements. The listener’s sense of consternation grows by the second when hearing ‘Zauberwald’; by end of track, nails will be bitten to the quick and teeth ground to stumps.

Only ‘Stigmata’ offers any breathing space and sense of calm; but it’s an eerie, doom-laden calm, one that descends after a major disaster and all surviving sailors now find themselves in the belly of a whale. The synth-heavy atmosphere is tempered by the bass clarinet of Niels Van Hoorn (from The Legendary Pink Dots). Merzbow is also on this track, though his characteristic metal pumping action is hard to detect, even when the band finally release the tension and kick into an aggressive, hard-hitting blast of guitar and drum nastiness that dispels the thick clouds of ambiguity and fear they have worked so hard to create. In title, ‘Stigmata’ may connect to the cover image of a sculpture by Marc Bijl, which I would read as a degraded Christ Figure and Madonna Figure. While I don’t see Phallus Dei as being especially interested in violating religious icons or breaking taboos (as many industrial bands do), I can see how these human figures dripping black tar create just the right visual equivalent for the music. A dark, heavy beast. From 13 June 2017.