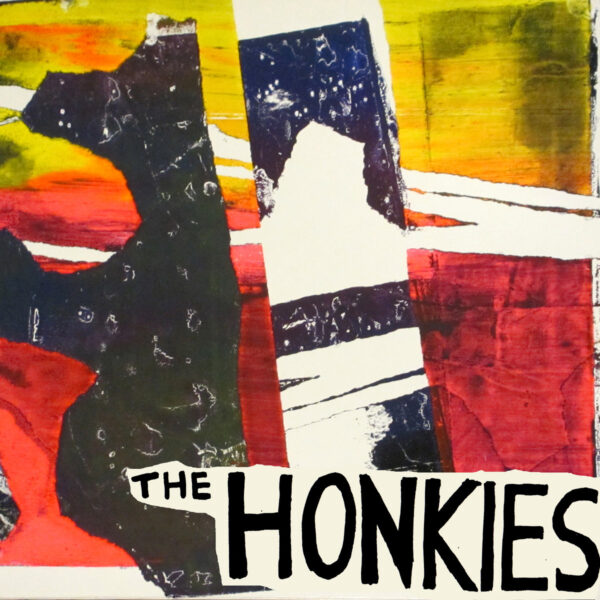 The Italian label Musique À La Coque seem to specialise in rescuing oddities and obscurities from recent musical history in their eccentric reissue programme. Over the years we have enjoyed unusual records by Nu Creative Methods and Le Ton Mité, which I’m sure I would never have heard but for the efforts of these Italian Coques. We the listening audience can only benefit from this approach, haphazard as it may appear, as I’m sure there’s a guiding mind behind the plan. The latest item to cross the desk is this reissue of the first LP by The Honkies, and it’s called How Do We Prevent The Advance Of The Desert? (COQ-011). I have never heard of this combo of English players, but they were an improvising troupe who existed from 1987 to 1993 and toured the UK and Europe quite extensively. Many of the names are familiar to us – Caroline Kraabel, a member of The Remote Viewers and sometime collaborator with Veryan Weston, and she’s an American ex-pat still making good with her saxophone today. Andy Diagram, the trumpeter, is also quite the veteran and worked in post-punk bands such as The Diagram Brothers and with David Thomas of Pere Ubu, before forming the lamentably bland Spaceheads. John Edwards, the great bass player, was the third Honkie though he’s not credited on this record; the other sax player, and vocalist, was Kathy Hulme, and Richard Harrison (also later a Spacehead) was the drummer, also credited with washing machine and trombone.

This LP was a DIY item originally released on vinyl in 1990 [1. The label claim it was their second album and released in 1989, not 1990. Reports differ.] with hand-painted covers, probably to be sold at gigs, a strategy following in the footsteps of The Arkestra perhaps. The Honkies managed to put out two more releases through Megaphone in the US, a label that was also home to R. Stevie Moore, The Work, Officer!, Fred Frith, Jon Rose, and other geniuses in the art-rock mode. All of this may prepare you to some extent for the riotous fun-sounding eruptions of joyous music that fly from the grooves of this LP, captured mostly at live events by the sounds of it, in Manchester and London. The Honkies evidently were not concerned about being “improv purists” in the Incus or Company Week mould, and “having a good time” was not ruled out of bounds. Not to put too fine a point on it, the music starts out crazy and spirals out of control every time, even on tracks lasting only a few minutes, and much whoopery and hilarity from the brass section ensues. The drummer would have been at home in any given post-punk band from this period [2. Perhaps they were trying to fill a deficiency left by the promising but disappointing Rip Rig + Panic. Or Pigbag.], and both the girls in the group enjoy pitching in with free-form vocalising, hollering, and singing. Come to that, the saxes themselves aren’t above imitating the timbre and cadence of the human voice, and create effects – verging on comedic – that sound like laughter, chanting, and screaming.

Did I mention The Honkies also wore home-made costumes on stage? Another touch that aligns them with The Arkestra to some extent, though it would have been nice to see more than one photo of them in their rig and regalia. Perhaps no more photos exist. I think more people should attempt music theatre, even at the risk of making ninnies of themselves in public. The Honkies’ wackiness, if that’s not too demeaning a term, extends even to the track titles such as ‘I carried my dancing shoes in my gas mask case’ and ‘Honk-it-yourself revolution’. This is an unusual record which I’m glad to have heard, even if it gets a little “cute” for its own good; it’s evident that The Honkies were very able technically, but were slumming it a bit and pretending to be no-talent punksters. But I have the same reservation about The 49 Americans, whose records I love; there’s just no denying those middle-class roots showing through in the poised cleverness of it all. If only The Honkies had lasted long enough to hook up with the Riot Grrl scene, then that could have been interesting in terms of flying sparks and cross-pollination of genres and ideas. From 29 June 2017.